Here’s how he described Cambria to Meta’s investors during the Q1 2022 earnings call:

“Meta Quest 2 continues to be the leading virtual reality headset. Later this year, we’ll release a higher-end headset, codenamed Project Cambria, which will be more focused on work use cases and eventually replacing your laptop or work setup.

This premium device will have improved ergonomics and full color passthrough mixed reality to seamlessly blend virtual reality with the physical world. We’re also building in eye tracking and face tracking so that your avatar can make eye contact and facial expressions, which dramatically improves your sense of presence.”

Project Cambria was announced in late October at Connect 2021 as a high end standalone headset for both virtual and mixed reality, launching in 2022, to be sold alongside Quest 2. At one point it was called ‘Quest Pro’ internally.

But what exactly does Zuckerberg mean by “replacing your laptop”?

The short teaser for Cambria shared at Connect 2021 shows one of VR’s key potential use cases: a portable but powerful workspace. The idea is that instead of being limited to hunching over the one small screen built into your laptop, you can have multiple virtual screens of whatever size you want floating in front of you. Consulting CTO John Carmack described the goal as “to be something that somebody hard up for money decides I’m going to buy a VR headset instead of a Chromebook or instead of a tablet”.

Meta has been slowly adding productivity features to the Quest operating system, branded as Infinite Office. If you have a Logitech K830 or Apple Magic Keyboard, they’ll show up in VR so you can type and use the trackpad to navigate. Triple window support was added to the web browser in August, with window resizing added in December. These windows can actually also be Android phone apps, but the Quest Store doesn’t serve these and there’s obviously no Google Play Store or Amazon Appstore, so such apps have to be sideloaded from a PC.

While the software is starting to support work use cases, Quest 2’s front-heavy design makes extended seated use uncomfortable and its passthrough view is low resolution black & white. Cambria appears to have a more compact and balanced design, with a smaller frontbox and a strap resembling Quest 2’s elite strap accessory. And as shown in the teaser, its high resolution color passthrough should allow interaction with real world objects as well as reading notes on paper.

Still, the focus on web apps limits the current scope of Meta’s VR productivity ambitions to taking on Chromebooks. A lot of work is done on Windows or Mac, leveraging power hungry native apps like Photoshop, Premiere, Unity, or programming IDEs. You can of course use apps like Virtual Desktop and Immersed to use your PC in VR, but neither is hassle-free and both work around an operating system designed for windows housed within physical screens.

Zuckerberg finished his statement by saying Meta will “share more details about Project Cambria in the months ahead as we get ready to launch it”. 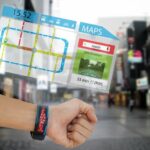 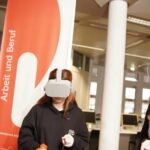