The city builder battle continues, with Cities: VR showcasing new gameplay across an expansive and complex city map on Quest 2.

This latest video from Fast Travel Games gives us some fly-over footage of a “detailed” and expansive city on a map called Northpoint. Indeed, the city does look impressively large and significantly complex.

While we’ve voiced some concerns about the visual quality on display in another recent Cities: VR video, it’s undeniable that the scale and size of the city shown in this new gameplay is impressive, especially running on Quest 2.

Both Jamie and I have been playing around with the other VR city builder, Little Cities, this week (and you can hear more of our thoughts in this week’s episode of The VR Gamescast). While Little Cities is quite satisfying to play and stunning to look at, it also feels a tad limited in terms of design potential and definitely smaller in scale when it comes to city size and management capabilities.

It’s looking increasingly likely that both these games will offer competent, but different, versions of a VR city builder game, then. Based on the footage above, Cities: VR may be the less visually-refined of the two, but definitely looks set to focus more heavily on management and complex city design.

ndeed, this is the sentiment echoed by Fast Travel Games staff on the Reddit thread for the trailer. Particularly in relation to graphics, Fast Travel Games said that optimizing for recording footage natively on Quest comes with massive challenges that have affected the gameplay footage. When you’re not recording, the game apparently “looks great inside the Quest 2 headset.”

You can hear more of our thoughts on Little Cities vs Cities VR on this week’s episode of The VR Gamescast, or read Jamie’s Little Cities preview here. 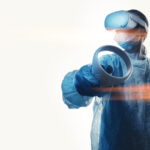 How is VR Transforming Healthcare? Latest Trends and News to Watch 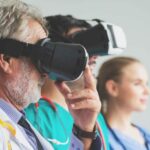 On-demand AR and VR Training: Coming to a Workplace Near You