Top News
Forst-Training in Virtual Reality dank St. Georgener Projekt
VR Experience Simulates The Feeling Of LSD &...
ManageXR, Prisms to Scale Immersive STEM Learning
5 Ways AR and VR Are Transforming Retail...
Augmented Books Are On The Way According To...
Wie man in der virtuellen Realität den Anschluss...
Microsoft HoloLens said to reduce training time by...
Effectively upskilling and training employees that work with...
Why Using VR for Training in the Renewables...
What Is a Digital Twin?
Home Knowledge What is Meta Doing with Haptics? Quite a Lot, Actually
KnowledgeResearch

What is Meta Doing with Haptics? Quite a Lot, Actually

VR headsets like Oculus have always come with hand controllers, but these are grossly limited. Traditional hand controllers work like virtual remote controls – you can press buttons to navigate, but they cannot understand your intent or provide you with feedback.

In other words, tracked hand controllers provided with VR headsets are a long way away from being an organic extension to our hands.

You cannot access the functionality of your opposable thumbs, and there’s no way to understand if a gesture or an action was perceived by the virtual world around you.

That’s why Facebook (now Meta) has been working on haptics technology for some time. They are the next evolution on the road towards true AR and VR, and haptics – in the form of gloves – will provide us with an incredible degree of control.

This is the first time the company has come out with a concrete product indicative of how this highly futuristic technology could play out in the consumer market.

What Is Haptics Technology?

Haptics can be defined as any technology that recreates the complete experience of touch, including but not limited to providing input, applying force, making motions, and receiving a reaction from the surrounding world.

In the context of AR/VR, haptics is typically discussed in conjunction with another technology called wired glove or data glove. A wired or data glove uses a variety of sensor technologies to detect and capture physical data such as the movement of your fingers.

These gloves are a type of human-computer interaction (HCI) device and typically come with powerful haptics capabilities to provide a rich, touch-based sensory experience in the real world.

Haptics and gloves featuring haptics technology is a science fiction staple, and has, indeed, been around as a patent since the 1980s.

Over the last ten years, startups like HaptX made significant progress in commercialising haptics and academic projects have enhanced the body of research.

Now, in Q4 of 2021, Meta has revealed that it is closer to a consumer-grade haptics device than ever before.

The Role of Haptic Feedback in Augmented and Virtual Reality

Despite the company’s recent rebranding and flurry of announcements in AR/VR, Meta isn’t new to immersive technologies.

Since its acquisition of Oculus for $2 billion in 2014, it has steadily picked up new AR/VR IP and invested in developing its own.

It set up Facebook Reality Labs (FRL – formerly Oculus Labs) to research all things immersive, and you can find mention of haptics as early as 2019.

Programmer Forest Smith speaks about a newly unveiled haptics-enabled device that aims to reduce video game input latency. Importantly, it was the first time that Meta was able to pinpoint the precise latency level of haptic inputs inside a VR environment.

Since then, barring the occasional casual comment, Meta has been relatively quiet about its haptics projects. However, after outlining its vision for the metaverse, the company’s investment in haptics makes a lot more sense.

Users can interact with virtual worlds more freely and naturally when they put on haptic gloves.

Instead of pointing to a feature and pressing a button on hand controllers (like a remote), they’ll now be able to pinch, zoom, touch, push, drag, and perform a host of other object-oriented interactions.

Keep in mind that gloves will need more than haptics to achieve this. Electromyography or EMG is also an important piece of technology, as it translates the electrical signals carrying human thought and intent into machine-readable inputs.

Haptics acts as an extension to this, so that every time you provide an input, you get back a reaction or feedback.

When you push an object in VR, you will be able to feel its weight. When you throw a ball, you can feel it leaving your fingers – all thanks to haptics.

In a blog discussing human-computer interactions through EMG, Meta explained that haptics is as important.

“From your first grasp at birth all the way to dexterous manipulation of objects and typing on a keyboard, there’s this really rich feedback loop, where you see and do things with your hands and fingers and then you feel sensations coming back as you interact with the world,” explained Sean Keller, Science Director at FRL Research.

In other words, without haptics, we would never know if we did something right, if something is about to fall, or if we made a misstep.

How Haptics Fit into Meta’s Vision for the Metaverse

Done right, haptics and haptic gloves could be the foremost input mechanism for users in the metaverse. While the VR headset will act as your eyes and ears, haptics will allow you to perform rich interactions and engage with your VR surroundings in a meaningful way.

When Can We Start Using Haptic Gloves from Meta?

Meta is cryptic about any potential launch date. On the one hand, it admits that a “mass-producible” haptics product would almost require you to bend the laws of physics and fast-track several years of algorithmic development.

On the other hand, it promises to get there soon – “It just wasn’t possible, but we’ve forged a path that is plausible and could allow us to get there.” 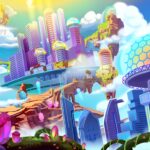