Why Facebook’s premature talk about a metaverse will likely backfire

The AR and VR industry has already been harmed by several cycles of hype and disappointment. Facebook may be creating another one.

CEO Mark Zuckerberg declared recently that he wants Facebook to become a metaverse company. But there’s a problem with that: This “metaverse,” as Facebook defines it, doesn’t really exist yet, and probably won’t for years. As with premature talk from past augmented reality and virtual reality companies, talking about such a faraway technology too early may hinder Facebook’s long-term effort to bring the metaverse to the mainstream.

In some ways, this evolution seems like a natural challenge for a social media giant to tackle, especially one that happens to own a major VR product (Oculus) through which people can experience digital spaces. Facebook began talking specifically about meetings in shared digital spaces at its F8 developer conference in May 2018.  Then Facebook began teasing its future augmented reality glasses, another key portal into digital spaces. This summer Zuckerberg seemed to widen the company’s vision when he began referring to the “metaverse,” a kind of alternate digital reality that would connect all the various proprietary digital spaces together.

Now Facebook brings up the metaverse regularly. This week, the company announced a new grants program that it says will help minority groups play a substantial role in defining the metaverse. At the Atlantic Festival on Monday, VP of Facebook Reality Labs and soon-to-be CTO Andrew Bosworth and global affairs VP Nick Clegg spoke on the subject during two separate interviews that were sponsored by the conference’s main underwriter—Facebook.

But in practical terms, the metaverse is still many years away. Some of the technologies required to fully realize it—such as VR or AR glasses with higher-performing displays in the lenses and great battery life—are not here yet. Lots of companies, including Apple, are quietly working on these and other problems with AR’s foundational technologies, but few of them are out talking about it as much as Facebook. Why?

Some have speculated that Bosworth’s and Clegg’s appearances might be an attempt to distract the press and the public from recent damning stories about Facebook in The Wall Street Journal that exposed fundamental problems with company, including a lack of content moderation in markets outside the U.S., a willingness to relax content rules for high-profile users, mountains of anti-vaccine misinformation in post comments, and Instagram research showing the app’s harmful effects on adolescent girls.

Asked why Facebook is talking so much about a nascent technology, Bosworth said Facebook just wants to get the conversation started early. “[In] the last 10 years we’ve seen that sometimes the public and regulators are surprised by the technological change, and that’s not healthy for anybody,” he told his interviewer, Wired contributing editor Peter Rubin. “So we’re trying to have this conversation out in the open well in advance of this technology ever being delivered in any integrated form.”

Bosworth’s answer is rich with irony. For years Facebook surprised users and regulators with new privacy-violating features, followed by contrite apologies and meager, often performative, concessions. Bosworth wants to convince the media and the public that Facebook is a more mature company now, that it won’t use the same growth-at-all-costs approach that helped it dominate social networking to capture the metaverse.

Instead, Facebook insists that its conquest of the metaverse will be “a much more gradual and deliberate” process than its breakneck dash in the late 2000s and 2010s to monopolize social networking. “It’s almost the opposite of the long-abandoned slogan ‘move fast and break things,’” Clegg told Sara Fischer of Axios in his Atlantic Festival interview.

By speaking out so early, the company also hopes to establish interoperability between the virtual spaces it builds and those created by other companies.

By talking about this nascent technology so publicly, Facebook may continue to undermine its already damaged reputation. People within the mixed-reality industry will tell you that the industry has already suffered the effects of hype cycles and mismanaged expectations. Google started talking about its Google Glass project way before the public was ready to hear that story. A privacy backlash ensued. People complained of the device’s limited functionality and its high price ($1,500). Years later Magic Leap captured the tech world’s imagination with its augmented reality headset and its own concept of the metaverse—the “Magicverse.” But the company’s technology wasn’t advanced enough to deliver on the vision (and the promo videos), and when that became apparent confidence in the entire AR space took a hit.

Facebook admits that its own AR glasses technology is still very much a research project. And the company is just now trying to understand how people will want to use such glasses. The recent backlash to its partnership with Ray-Ban to produce glasses embedded with cameras indicates how the public might feel about social interactions with people wearing sophisticated AR glasses—especially ones with live cameras running face recognition.

Facebook is just the latest tech company to talk a big game about AR and the metaverse. It might get the public’s and the media’s attention, but it’s a mistake to continue talking about it years before this mythical realm actually exists. Facebook may eventually be seen as just another Big Tech company that promised something it wasn’t able to deliver.

A public VR/AR digital space in some form, and under some name, will eventually start to grow, and it will present very serious social and regulatory challenges. The tech industry, the public, and perhaps the government will need to have a very serious conversation about it. But this should happen after a market for the required hardware and software ecosystems have begun to form, when Facebook’s metaverse is more than a concept in a lab. 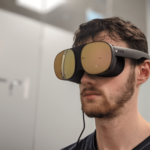 HTC ‘Looking Into’ iPhone And Laptop Support For Vive Flow 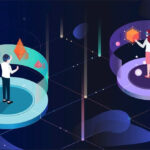 Metaverse cheat sheet: Everything you need to know