Facebook changes the name of its upcoming social VR platform to better represent its diverse selection of virtual worlds.

Last year Facebook launched its invite-only Horizon beta program, offering a select group of Oculus Quest users the chance to create their own virtual worlds using an extensive arsenal of best-in-class world-building tools. Since then, Facebook Horizon has grown immensely in both size and scale. Early creators have already created hundreds of worlds for the highly-anticipated social VR platform. What was once a barren digital landscape is now a community-driven world where users can create, explore, and collaborate on custom games, activities, and locations.

To help support the creation of even more worlds, Facebook has announced a $10 million Creator Fund. This generous program is intended to recognize the efforts of Horizon creators in the hopes of further encouraging the creator and developer community. But that’s not all. Facebook is also changing the name of the social VR experience from Facebook Horizons to Horizon Worlds. According to the company, the name change is designed to reflect the diverse VR worlds that currently exist in Horizon Worlds.

Sometime this year, Facebook will launch a series of creator competitions designed to reward the very best worlds in Horizon Worlds while, simultaneously, recognizing those who take advantage of the in-game tools. Creators can win up to $10k in cash prizes. Sign up here to be notified the company launches its first competition.

Through Horizon Worlds Creator Accelerator Program, creators can learn important skills for excelling in. One session, for example, focused on building more inclusive worlds. The application-based initiative is designed to give people from diverse backgrounds an advanced crash course in Horizon Worlds creation. Facebook recently completed its pilot class of the program. The company will be accepting new applications next month as part of an expanded Creator Accelerator Program beginning early 2022.

During a walkthrough of Horizon Worlds, I was able to see just how much the social VR platform has grown since it first launched in 2020. In the early days, creators would build objects and then meticulously move them around to get that perfect angle; a tedious and time-consuming process. Now, creators can simply “snap” an object to a specific location on the map, drastically reducing the time it takes to create worlds. This is just one of many improvements Facebook has made since the beta launch.

During my time with the app, I met with different creators and participated in a variety of interactive activities. I played a fun shopping game called Shop Shop that had me frantically running around a store collecting a variety of food, immersed myself in a beautiful meditation world, and jumped onto a moving train where I was able to walk through a number of luxury cars filled with artwork and dark wood details.

Moving forward, Facebook has big plans for its rapidly evolving social VR platform. Mark Rabkin, VP at Oculus, told VRScout during an interview, “We’re going to be looking at developers of different sizes and different sophistication, and we’re going to be looking at them to start building in Horizon Worlds and creating new worlds,” adding “It’s a lot of hands-on and close approach to it. It’s almost like a partnership with the developer, and we give a lot of guidance and a lot of support.”

“We are really open to what creators want to pitch to us. We’ve learned so much from the community now,” added Meaghan Fitzgerald, Product Marketing Director at Oculus. “What’s going to push the envelope next? What is the next problem we need to solve? Making sure the next wave of creators who are going to ask us to support them. We expect they’ll come from a variety of backgrounds. Right now it’s going to be more about building community, bringing people together in the space.”

Horizon Worlds is currently still in beta, which means it’s not open to the public just yet. Rabkin explains that it’s all about nurturing a two-sided ecosystem of creators and players. “We’re trying to build both sides of the community and ratchet it up thoughtfully. To make sure the creators and people exploring have a very great time. It’ll open up faster and faster over the next few months,” said Rabkin.

This past August Facebook took the steps of stretching Horizon Worlds beyond social VR when they unveiled Horizon Workrooms, a VR coworking platform that allows you to host meetings, access your computer, and take notes in VR. 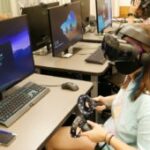