Smartphones Are on Their Way Out, and Augmented Reality is Coming to Replace Them

Advertiser Disclosure: At Slickdeals, we work hard to find the best deals. Some products in our articles are from partners who may provide us with compensation, but this doesn’t change our opinions.

The age of smartphones could be over sooner than you think.

While it might not feel like people have become less interested in cell phones, the numbers show it all. Sales for smartphones dropped two years in a row, and though some of that market decline has recovered, major companies like Apple and Google have also started working on sleek pairs of augmented reality (AR) glasses to take their place.

Based on rumors reported by The Information, Apple may be looking to replace the iPhone within the next decade. Though the tech giant hasn’t officially announced this intent, The Information claims attendees at a private, internal presentation it held in 2019 learned Apple is planning to first release a virtual reality (VR) headset in 2022 and then a sleeker pair of AR glasses in 2023. A more recent Bloomberg report agrees with this timeline, claiming the public can expect a pricier headset in 2022 followed by a more stylish pair of glasses at a later date.

Google first toed the line of mixed reality glasses by releasing Google Glass in 2013, but at the time society was nowhere near ready to fit smart glass tech into our everyday lives like we do smartphones.

Even now, if these companies are serious about bringing AR into the mainstream to the point where we set aside our cell phones, a lot still needs to happen. However, rumor has it several players have already made big strides in developing the technology.

What is Augmented Reality Used For?

AR seeks to blend reality with virtual elements, and it has significantly more potential than VR for practical applications in work and everyday life.

Instead of bulky, immersive goggles, picture a pair of stylish eyeglasses that display digital elements and virtual objects directly on the lenses.

Companies have already started working to incorporate mixed reality into tech; if you ever played Pokémon Go or used Apple’s ruler app, you’ve already tried out basic AR. While these are fun applications of the technology, companies are now looking to shifts gears by applying AR tech to more practical situations.

A world with these smart glasses looks like something straight out of a sci-fi film. Imagine you’re in the stands of a football stadium watching a game and the stats and player information are projected onto your lenses — you don’t even have to lift a finger. You could get email and text notifications displayed right in front of your eyes, so you don’t have to stare at your phone screen while crossing the street. Or maybe you’re walking around a new city trying to find the nearest coffee shop, and there are arrows and directions projected along the path that lead you to your destination.

The possibilities are endless, and many applications extend into business sectors. Microsoft released a pair of rudimentary smart glasses in 2016 geared heavily toward manufacturing, retail and health care applications. In these environments, the device helps users visualize operations or procedures right in front of them. It’s likely we will see more of a focus on business applications with initial models of AR glasses before the tech is advanced enough for everyday use.

We rely on our smartphones heavily, and in order for them to be replaced, AR glasses will have to pick up the slack to the point where your smartphone is just dead weight.

Moving Past the Learning Curve of Augmented Reality

In order for AR technology to replace smartphones in the coming decade, we’ll first need to see some big upgrades from what’s currently possible as well as some improvements to VR technology.

Rumors and possible specs are already swirling about Apple releasing a VR headset by 2022, which will be followed by a pair of Apple Glasses that use AR technology to project virtual objects onto the lenses. The company is reportedly hoping to test out multiple-reality tech with its VR headset in order to work out any kinks and eventually transfer the technology to more complicated AR devices.

The tech giant isn’t the only one participating in the race to replace smartphones — companies like Microsoft, Google, Facebook and Amazon are all investing in developing multiple-reality tech for their own uses. In the process to make AR advanced enough for the wearable tech market, these companies have to determine how to overcome some crucial road blocks that have the potential to derail their efforts if not addressed.

Privacy concerns were a major issue with Google Glass, as initial users of the device faced backlash from passersby who felt the attached camera invaded their privacy. Apple is looking to fix this concern with its upcoming glasses — according to a patent spotted by Patently Apple, the tech company appears to have sought out multiple solutions, such as making the camera attachment removable.

Another alternative discussed in the patent would require a modular key in order for the camera to record so people could tell if they were being filmed. Though the presence of this information in a patent is not confirmation that we will see the technology used in the final product, it’s a sign that Apple is taking privacy seriously in the rollout of its AR glasses.

Facebook is similarly working on a pair of smart glasses dubbed Project Aria, and the company is already considering how to best ensure that privacy is respected with the tech as they bring it into the workplace for testing. Andrew Bosworth, Facebook’s head of hardware, assured the public that the glasses will be off limits in private areas such as restrooms, and the data gathered by the glasses will be scrubbed of people’s identifiable details before being analyzed for research purposes.

Though Facebook is currently gearing their tech to be used mainly in its office spaces, the company is clearly investing in resources that will ensure external users feel safe in the presence of those wearing the Project Aria glasses.

Where Google Glass failed to impress in regard to its aesthetics, other companies are hoping to stand out with their stylish frames.

While the VR headset Apple could be releasing in 2022 will likely resemble the other fairly bulky VR technology already on the market, its AR glasses are rumored to have a much more stylish appearance.

According to Bloomberg, the prototypes resemble sunglasses with a plastic frame, though the product is still reportedly in the early stages of development. We have yet to hear any speculation about the glasses coming in a tinted option, though that may change as its release date eventually inches closer.

Facebook is also taking the appearance of its glasses very seriously, as the company recently announced it will be partnering with the popular glasses brand Ray-Ban. This is a big sign that the company isn’t just interested in making powerful AR tech — it also wants to create a product that can be worn everyday as a stylish pair of glasses.

AR Glasses Could Have Some Outlandish Capabilities

Smart glasses won’t be an immediate replacement for your smartphone, as early models of the Apple Glasses are rumored to only work in conjunction with your smartphone. According to Bloomberg, the eyeglasses will sync with your iPhone to display emails, maps and other virtual features directly on the lenses. They are also rumored to be using the VR headset as a vehicle to test out new multiple-reality apps to later be transferred over to the Apple Glass.

According to information found by Patently Apple, the new Apple glasses would not need prescription lenses to operate. If true, this could be a game-changer for wearable tech and would open up the market for visually impaired customers to try out the glasses. Diving into an even more outlandish application of Apple’s tech, another patent implies the company may be working to help users see in the dark using sensors around the head to give a better sense of one’s surroundings.

Amazon is reportedly considering using AR glasses to speed up their packaging process, as the tech could possibly be advanced to direct warehouse workers to find the proper items in a large warehouse.

Will AR Glasses be Cheaper Than Smartphones?

While companies are still working out the technicalities of crafting sleek AR glasses, the price tag is likely going to be higher than that of smartphones in the meantime. Google Glass was initially priced at $1,500 upon its initial release, and the process of developing a whole new line of technology is not cheap.

Reports from Bloomberg first speculated Apple’s VR headset could be as expensive as $5,999 and would hence be marketed to a smaller group of people as opposed to the general public. This price tag is significantly higher than multiple-reality technology already on the market today, pushing the headset toward a very niche, wealthy market. Some insiders anticipate the tech giant will only sell one headset per day in its stores, making it even harder to get ahold of.

There is still hope, however, that a multiple-reality headset will be marketed to the general public at a much cheaper price in the near future. According to Apple leaker Jon Prosser, the Apple Glasses are rumored to retail for $499, significantly cheaper than their VR predecessor. Meanwhile, Apple analyst Ming-Chi Kuo believes they will retail for around $1,000.

Keep in mind none of these speculated price tags are confirmed, and we are still just working on rumors gathered from leaked information.

Don’t Throw Out Your Phone Just Yet

Even with Apple’s AR/VR headsets on the horizon and other companies swiftly following suit, we won’t be seeing a pair of eyeglasses replace our phones just yet. Considering how the Apple Glass will likely require an iPhone to work, there’s no rush to start worrying about the transition.

These companies are hoping to shift away from the smartphone by the end of the decade, so users have plenty of time to get accustomed to the new tech hitting the market. Facebook CEO Mark Zuckerberg even gave some input about the race to end smartphones, sharing “While I expect phones to still be our primary devices through most of this decade, at some point in the 2020s, we will get breakthrough augmented reality glasses that will redefine our relationship with technology.”

At the end of the day, we can expect to remain fairly reliant on our smartphones for the time being, though the future of technology is looking especially bright. 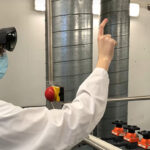 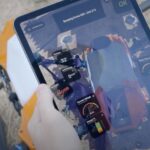