What could be more dangerous than swinging a hockey stick around your living room? Doing it blindfolded by an Oculus Quest, of course.

That’s exactly what you can do with Hockey VR from Melcher Studios. The game itself is out now on Oculus App Lab for $3.99 USD and lets you take shots at the goal. But Melcher also sells a peripheral it calls Realstick. This simple clip allows you to hang the ring of a Oculus Touch controller onto the handle of a hockey stick and then hold the stick instead of the controller. Check it out in the trailer below.

It’s a similar idea to what we’ve seen with HTC’s Vive Tracker peripheral or, going back even further, even the original Oculus Touch clipping onto a Rock Band guitar for Rock Band VR. By using an actual hockey stick in-game, you should get a more tactile, immersive experience. Melcher sells the peripheral in both Quest 1 and 2 controller variants.

You don’t need the stick to play Hockey VR itself, but it’s certainly an interesting gimmick for the experience. The game allows you to practice your shooting skills, not simulating a full match but instead just focusing on taking aim at the goal. You can choose to play in an arena, outdoor hockey rink, or on a frozen lake in the Rocky Mountains.

Realstick itself costs $14.99 CAD (as you might’ve guessed, it ships from Canada). It doesn’t come with its own hockey stick, of course, as those things tend to be pretty expensive. Will you be checking the experience out? Let us know in the comments below! 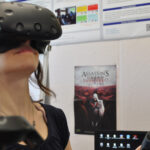 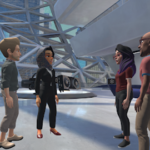