Top News
Microsoft HoloLens said to reduce training time by...
Effectively upskilling and training employees that work with...
Why Using VR for Training in the Renewables...
What Is a Digital Twin?
Virtual reality—The Future of Flight Training
XR Success in Vocational Training: The Conservatoire National...
VR For Education: How The World Already Changes...
Cooking Simulator VR Coming To Quest 2 On...
Siemens Healthineers adds VR training for mobile 3D...
VReps Uses Virtual Reality as a Basketball Training...
Home Knowledge Walk Through Buildings Before They Are Built
KnowledgeResearch

Walk Through Buildings Before They Are Built

In our journey through the seemingly endless plain of remote collaboration sites, we found three companies, The Wild, InsiteVR, and IrisVR which specialize in VR building design for architecture, engineering, and construction (AEC). Designers have relied on Computer Assisted Design (CAD) for years, building wireframes of 3D buildings, which are viewed through a 2D screen. With VR technology, these remarkable tools allow the client, the architects, contractors, and interior designers to walk through the structure before it’s built.

The Wild, IrisVR, InsiteVR, and Resolve (a product from InsiteVR) enable designers and engineers using virtual reality to create a design with sketching tools that enable any user of the shared, persistent, simulation, to experience, edit, and collaborate on creations in real-time with others. The collaboration sites push the limitations of what a user can build and experience, in some cases with little experience. This is a huge segment of the economy worth tens of billions of dollars, specialized new technology companies in this category have the advantage of fishing where the proverbial fish are and are beginning to gain traction across the industry. Gensler Design’s Creative Media Leader for Southwest Region, Megan Lubaszka, stated, “collaborating with sketching tools in VR with other designers allows us to fully deliver, revise, and customize the creative vision of a design, experiencing the essence of presence, without it being built.”

The tools to customize a space are at your fingertips. Dynamic editing tools such as annotation with pens, speech-to-text commands, customizable colors, and geometric shapes help provide the ever-changing ideas of creation or blueprint of design, as seen in The Wild, which is integrated into the Autodesk Construction Cloud. “The tools to both incorporate spaces in the Wild and explore the Wild are both easy,” said Michael Potts, a The Wild user for two years and CEO of M2 Studio, “if you spend a little time with them they are very powerful as well.”

Designers and engineers using IrisVR can bring complex architectural 3D models into virtual reality space to present work and collaborate with clients and colleagues. IrisVR allows meeting hosts to curate walkthroughs of their 3D models by teleporting participants along with them, integrating with Revit, Rhino, Sketchup, Navisworks, and several other 3D model editing software packages. Moreover, freehand and spatially aware annotations can be added and flagged to togglable geometric layers for review after meetings.

InsiteVR is also integrated into the Autodesk Construction Cloud to reduce late-stage construction errors by thoroughly inspecting designs in immersive coordination meetings. Remote users can gather inside a 3D building information model (BIM), walk around, annotate, and revise models at any scale and from any perspective. Users have access to tools allowing them to draw, measure, and add notes using speech-to-text. BIM metadata is available in the virtual environment so users can easily inspect element details. Resolve prioritizes only the Oculus Quest to run complex BIM with up to 500 million polygons, expanding upon the often limited visualization performances of other AEC platforms.

Scale places an important role in the experience on these sites – downsizing the user to give the essence of standing in space. The models can be teleported into a new reality, as if the user’s scale shrunk like in Fantastic Voyage or Honey, I Shrunk the Kids. In The Wild, this scale can range from 1:1 to a skyscraper, making the other users feel like ants, though it provides a new perspective to discover aspects of design that are not as apparent on a 2D screen. Furthermore, even models can be scaled, changing the size of something and then measuring it to be precisely accurate given the new perspective. Just like a game engine, the time of day can be simulated.

Gensler, is the world’s largest architecture firm with over 5,000 people and 50 offices. They designed the Shanghai Tower and the NBA Store in Times Square, useing 3D programs such as Fuzor or IrisVR to visualize their designs. “All clients now need some sort of animation or VR to deliver to stakeholders or a team to visualize a project, in addition to the 2D set.” Says Gensler Creative Media’s Lubaszka. In addition to the native VR sites, Gensler also uses commercial game engines such as Unity and Unreal Engine to achieve the highest rendering, lighting, animation, and models to reduce the cartoony appearances of CAD software in representing designs.

Gensler also has a mobile app, Gensler VR, that allows clients to view their own designs via a computer model in a 360 pano. Single-player visualization platforms such as Enscape and multiplayer visualization platforms such as IrisVR, both of which the firm uses, extends the ability to collaborate or work solo to visualize Revit models or CAD drawings with ease of access. Using AR on a mobile device, clients can literally walk through their building in the exact place where the building can be built. “The clients now expect 3D visualization far more detailed and complex than the traditional physical models, which we also still make, because they look great in a boardroom.”

This story was written with Brandon Cloobeck. 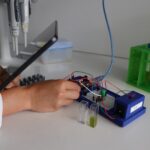 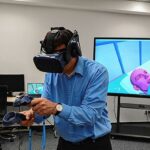