With the recent developments in immersive technology over the past few years, AR navigation has been somewhat of a hot-button topic within the automobile industry.

We’ve seen numerous manufacturers flirt with the idea of interactive windshields and AR-enhanced heads-up displays in the past, such as WayRay’s AR HUD for Porsche or Panasonic’s AI-powered AR HUD. Now it appears as though high-end car manufacturer Cadillac is getting in on the augmented action.

This month we received a closer look at the AR navigation system featured in the new 2021 Cadillac Escalade, which promises distraction-free on-screen navigation brought to life by AR notifications. In a video provided by the company, actor Lamman Rucker (Tyler Perry’s Why Did I Get Married, Meet the Browns) guides us through the capabilities of the luxury SUVs AR HUD.

After marking his destination using the touchscreen display, a live feed of the road is broadcasted directly to the curved 38-inch dashboard located above the wheel. Whenever Rucker is presented with a new direction by the onboard navigation system, digital turn signals appear directly over the real world, indicating which direction in which to turn. Think of it like Google Maps’ Live View feature or Apple Maps’ AR walking directions, but in a car.

“Augmented reality is a great feature,” says Cadillac Escalade Product Manager, David Schiavone in the video. “It actually takes a live street view and puts it in the cluster display and if you’ve got a navigational route in there, you will see a big set of arrows that tell you, “this is the time to turn right now.”

In addition to the visual indicators, the navigation system also makes use of key audio cues. The closer you get to a turn, the louder the audio becomes.

For more on the 2021 Cadillac Escalade, visit here. 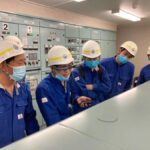 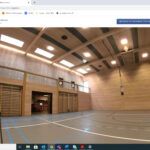