Apple and Snap Pick Up Where Pokemon Go Left Off

Advances in technology are laying the foundation for augmented reality to disrupt markets beyond gaming to social media and commerce.

First there was Pokemon Go. Now augmented reality is growing up.

For years, techies have envisioned that AR technology — which can superimpose digital content over real-world images — would drive the next major shift in computing. That vision has long seemed just out of reach. But a spate of recent investments and announcements suggest that AR’s moment has finally arrived.

Several industry leaders are making large bets on the technology, including building dedicated AR headsets. Last month, Snap unveiled its latest Spectacles prototype and bought AR display component supplier WaveOptics for more than $500 million. Facebook Inc. has more than 6,000 employees working on its virtual-reality and augmented-reality projects. And Apple Inc. is said to be developing a virtual-reality headset with some AR functionality for a possible release in 2022.

It’s clear that companies are anticipating an AR wave. In May, Snap Inc. unveiled a marketplace where brands will eventually be able to connect to 200,000 AR experience makers. At the same event, the company announced the ability to add gesture and voice-control capabilities to product catalogs where consumers can virtually try on clothing and accessories without touching the screen.

More details about the future of AR trickled out during the Apple-Epic Games Inc. antitrust trial. On the back of its ownership of the widely-used Unreal programming engine, Epic has unique insight into budding trends in the gaming industry. So it was telling when Apple’s counsel cited an internal board presentation in which the Fortnite maker indicated the need to act quickly before AR took off and further entrenched the App Store’s high fee structure. The fact that Epic then sued the world’s most powerful company speaks to how seriously Epic is taking AR’s imminent rise.

The potential economic implications of wide AR adoption are vast. Although it was a free-to-play mobile game, Pokemon Go serves as AR’s biggest success story so far, and a compelling example of how it can impact consumer behavior. The mobile app drove hundreds of millions of people to venture outdoors to find, battle and capture virtual creatures at physical locations. And real-life businesses benefited. According to an academic study, restaurants that were virtual stops inside the game generated increased foot traffic, better online reviews and a more than a 4% sales boost on average. The game’s publisher, Niantic Inc., has made $4 billion in revenue since the app’s 2016 release.

It’s also noteworthy that Pokemon Go was based on rudimentary AR with basic, cartoon-like overlays. Imagine what’s possible with newer technologies. E-commerce software company Shopify Inc. said last September that product pages with AR experiences led to a 94% higher conversion rate compared to traditional listings. I expect businesses will figure out more effective ways to reach customers as they get accustomed to the latest tools.

After years of being a quirky technology on the periphery, AR may now really be the next big thing. The confluence of important advances in software and hardware, along with big bets from the smartest entrepreneurs, are laying the groundwork for the technology’s breakout. Get ready to strap in.

To get  Bloomberg Technology’s “Fully Charged” newsletter delivered directly to your inbox, sign up here.

Foto: Augmented reality’s breakout moment may be here, with Snap and others putting it to new uses. Source: Snap Inc. 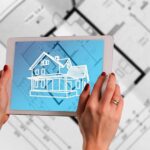 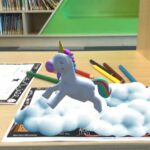 7 Augmented Reality Tools for the Classroom