Virbela came to our attention through remote events, but it can do so much more.

Have you ever played games in VR and thought “Why can’t I do everything in VR? Why can’t I work in VR?” With Virbela, you can – and some people already do.

With companies having virtual offices in Virbela, organizations hosting virtual conferences there, and anyone being able to meet in their public spaces, ARPost took a step inside the platform to check it out.

The Long and Short on Virbela

You caught us: ARPost didn’t just discover Virbela and hop in to tell you about it. We’ve been in their virtual campuses a few times before.

So far, two of nine Immersive Learning Research Network Global Conferences have taken place in the platform, and we met with the company’s president and co-founder Alex Howland to talk about VR Remote Collaboration in April 2021. Still, it’s a great app and we at ARPost thought that it deserved its own spotlight article.

Virbela was founded in 2010 with support from the University of California San Diego, but it didn’t stay there for long.

“Once we worked through spending that [early-stage investment] money with the university, we spun out on our own,” Howland said when we met inside the platform. “Instead of just coming here for learning and development, this can be a place where people go to work.”

The platform’s first big success story was with eXp Realty. The “global online brokerage” had all of its offices and corporate events within Virbela by 2016. In recent years, eXp has grown from 20 to almost 200 members.

“To see a united community, people who are all there for the same reason… it’s a community that has really thrived in its environment, and it’s thrived at the individual level, the team level, and the organizational level,” said Howland.

Over the years, other companies have opened offices within Virbela. But, same as for so many companies in the XR space, the pandemic changed everything.

“We didn’t really have an events business pre-pandemic,” said Howland. In 2020, the platform hosted more than 450 events, according to a release shared with ARPost.

Virbela requires an app download but no specialized hardware. If you’re used to WebVR experiences like Hubs, downloading an app and needing to fire it up every time that you use it can sound like a drag. And it is a bit of a drag. But, as we learn more about the platform’s affordances and features, it starts to make more sense.

Virbela will run in headsets, but all that is really required is a PC. According to Howland, because most people who most regularly use the platform use it as their always-on office, they’re not necessarily targeting headset users. Though, a headset can improve the experience for shorter, more interactive sessions.

Within PC, the platform is navigated using keyboard controls and a mouse or touchpad. Some items can even be interacted with, from chairs and doors to beach balls, to virtual tools like whiteboards. Users can also do actions like waving and even dancing.

But, before you worry about navigating anywhere or interacting with anything, you get to make an avatar.

The avatar interface is one of my favorites in all of VR, and you can get the appearance pretty close. However, it’s not a photorealistic likeness, and it’s not supposed to be.

“We have definitely purposely taken a cartoony nature to our avatars… to try to avoid that uncanny valley experience,” said Howland. “Sometimes it hurts us because people think that they want that photorealistic experience until they get it.”

The Virbela Campus is a massive space consisting of multiple buildings and areas. The campus can be explored on foot, but users can also teleport from place to place using the campus locations menu. The menu also displays the names of other users in the campus and areas within the campus. Also available is a chat menu so users can connect without disturbing talks.

There is an open version of the Virbela Campus that anyone can access, but this area also includes permissioned areas like private offices essentially “rented” by client organizations. Most of the campus is open and it is used for public events.

However, client organizations can pay for their own private worlds that require separate app downloads. That way, conference events aren’t interrupted by random users and conference attendees don’t get lost in the open world.

Whether you’re in the open world or a private world, locations include an auditorium, a conference hall, an expo center, an outdoor commons area, and a beach (with a drivable speedboat). Virbela also recently added a “Speakeasy” venue for after-hours social events and parties.

It might sound like it would be easy to be overwhelmed by a large number of people in Virbela’s large open world. However, the platform employs a few handy corrections.

The most fun is probably spatialized audio. A speaker sounds louder the closer you are, so you aren’t distracted by conversations happening across the room. However, this feature is turned off for some users in some locations like the auditorium so that all attendees can hear speakers. There is also a “Stage Zoom” so “every seat is the best seat in the house.”

The most practical solution is offered through private conversation zones. Identified by blue areas marked on the floor, these areas offer private spaces – conversations within these zones cannot be heard by users outside.

Together, these features “help to build the serendipitous conversations that happen outside,” according to Howland. “It really adds value and people really value it.”

We’ve only scratched the surface of Virbela’s tools and only introduced you to a handful of the companies that use it and the amazing things that they use it for. If you really want to experience all that the platform has to offer, keep an eye out for the next immersive remote event taking place within the platform and check it out.

In the meantime, you can download the Virbela app at any time and take a stroll around the open campus. Or, if you’re thinking about using the platform for a remote event or virtual workspace, reach out to the team for a tour. 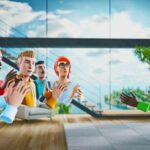 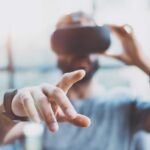