The 10 most innovative companies in augmented and virtual reality

Consumer virtual reality (VR) headsets took a stride toward the mainstream with the release of Oculus Quest 2 this year, while augmented reality (AR) experiences have been mainly phone-bound—consisting of Snapchat overlays and Apple ARKit apps. Still, some compelling AR and VR content was produced, such as the Solastalgiashort film that took honors at the Sundance Film Festival, and Valve’s new game, Half-Life: Alyx. Because of the pandemic, some businesses have begun thinking about bringing far-flung employees together to collaborate using spatial computing. These are the companies whose products did the most to push mixed reality forward during 2020.

For bridging reality with mini apps

For Snap, 2020 might be remembered for the launch of “minis,” or little third-party apps that run inside the company’s messaging app. The apps can be used in social ways: Two friends can use a mini to figure out a movie to see, and then buy the tickets together. Or two friends might shop for a prom dress together (yes, Snap’s audience skews a little younger). And the developers of these little apps can either bring their own computer vision models or use Snap’s to let users identify places or products in the real world. The company says it’s been working with retailers on ways to keep business humming during the pandemic. For instance it launched a virtual try-on app with Gucci in June. Imagine pointing your Snapchat camera at your feet to see how a pair of Gucci shoes would look on you, then simply pushing a button on the lens to make the purchase. Snap’s AR try-on technology, launched last June, allows you to do just that. With its new Camera Kit tool, Snap is also letting brands like MLB and Nike build Snapchat AR lenses into their own apps, for their communities to enjoy. It’s in a position to do so: Snap has seen a big bounce in usage since people have been trapped at home (with their phones) during the pandemic. The company says its daily active users grew to 265 million in Q4 2020, compared with 218 million a year earlier, average revenue per user is up from 33%, and it anticipates an impressive 50% revenue growth in the years ahead.

For turning fitness into a destination

When done well, VR and fitness can be a match made in heaven, and Supernatural may have found the formula with its immersive workout app for Oculus Quest. For a subscription price of $180 per year, you get a library of full-body workouts that put you in beautiful environments with expert one-on-one fitness coaching. You can further augment the experience with a wide range of music to choose from, and new workouts are added every day. Supernatural, which launched just as the pandemic quarantine set in, got a boost during the remarkable circumstances, as people searched for workouts that were inspiring but could be done indoors.

For controlling the narrative

Valve, which makes VR headsets and VR games and other experiences, had a big 2020. The company’s new VR game Half-Life: Alyx has wowed critics and is expected to be the biggest mixed reality game release of 2020. It’s a first-person shooter set between two other popular VR games–1998’s Half-Life and 2004’s Half-Life 2. On the hardware side, Valve’s Index VR platform, while being a little pricey, is widely considered to have the best new controller—a band of fabric around the user’s knuckles that senses the movements of the hand.

For chipping away at making mixed-reality glasses a thing

The holy grail of mixed-reality glasses is making them svelte enough so that people will actually wear them. As the dominant provider of both 5G modem chips and image processing chips, Qualcomm could play a big role here. The two chips, working together, could send a certain amount of the image processing up to a paired device or a server in the cloud so it doesn’t all have to be done in the glasses. To this end, Qualcomm this year released a new chip that unites 5G connectivity with mixed-reality image processing. It also began offering a certification process so that smaller glasses makers build their devices around those chips, then come to market with some Qualcomm branding on their products.

For showing us the future of mass-market AR glasses

For many of us, the Chinese company Nreal was the first to show us what a real mixed-reality consumer product looks like–one that looks more like a pair of glasses than a helmet and costs less than $500. Many more such products will likely follow. Nreal made a big splash at CES 2020, and has now launched its product in South Korea with U+ and most recently in Japan with KDDI. The company has no partnerships with U.S. carriers yet, in part because the product relies on 5G, which is far from ubiquitous in the United States. However, Nreal recently signed a partnership with Deutsche Telecom, which could mean that T-Mobile will be its partner in its American debut.

For bringing teams together in virtual space

After the pandemic hit, suddenly everyone was thinking about ways to replace the face-to-face collaborative work that gets done at the office. Spatial has been working on this problem for years, so it saw its profile rise in 2020. The company’s 3D collaboration space lets participants from around the building—or around the world—represent themselves in a virtual work space using an avatar. The face of the avatar is created from a picture of the user’s face. The experience still has some rough edges, but it’s good enough to allow teams–especially those that collaborate closely and visually on physical products from remote locations–to get their work done. This year Spatial became available on Oculus Quest, Quest 2 headsets, and on Nreal glasses.

Surgical Theater was founded by a couple of Israeli fighter pilots who thought surgeons could benefit from surgery simulations in the same way pilots benefit from flight simulations. They were right. The company’s VR software lets surgeons walk through and visualize complex surgeries, including brain surgeries, in VR before ever touching the patient. This year hospitals have discovered that the software is also useful in the informed consent process, because it allows patients to see, in VR, exactly what a surgeon intends to do to their body before they give their consent. The company made national news last March when its software rendered
a full, 360-degree VR depiction of the ravages of COVID-19 on the lungs of a real patient.

For breaking down the walls to create AR experiences

8th Wall developed a phone-based augmented reality platform where AR experiences are created with JavaScript and WebGL. So they can run within a mobile browser–no app required. Ad agencies can use the company’s WebAR tool to create experiences that run on their brand client’s websites viewed within Safari and Chrome on iOS and Android devices. The platform supports many of the features that Apple’s ARKit and Google’s ARCore do, including light detection, surface and edge detection, and six degrees of freedom in user motion. In 2020, Lego used it in Harry Potter sets that turned walls into magic portals, and Burger King teleported the “King” and rapper Lil Yachty into viewers’ homes during the MTV VMAs.

AppliedVR is perhaps the best-known of a cadre of VR content companies that specialize in helping people deal with pain and anxiety. The company’s software is developed by a team of psychologists, doctors, researchers, and patients, and is meant for use within clinical settings. This year AppliedVR has found a new use case in helping give relief to people who have been traumatized after contracting COVID-19. The company’s research on the subject has appeared in numerous peer-reviewed clinical research journals.

For creating art with a message

Antoine Viviani’s and Pierre-Alain Giraud’s mixed reality experience Solastalgia (which refers to the psychic trauma induced by climate disaster) was one of the two or three most talked about VR features from the 2020 Sundance Film Festival. Produced by their Providences Films, the short, with its beautifully rendered backgrounds and custom effects, casts up to 12 people (wearing VR headsets) as visitors from the future to visit a destroyed planet. The visitors discover that the planet’s last survivors have left behind a glowing monolith-like machine containing their finest memories of their home. It’s a darkly beautiful experience that contains a clear message about our own planet.A version of this article appeared in the March/April 2021 issue of Fast Company magazine. 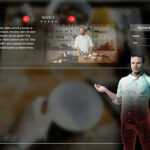 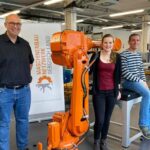