No matter what virtual reality (VR) system you use they’ve all got some sort of barrier/guardian system which you can set up to stop you from walking into walls or furniture. Oculus’ even goes so far as to point out potential obstacles in the setup process. But none of this helps when it comes to real-world variables, like the cat walking in and trying to trip you up. A newly published patent issued to Microsoft aims to solve this dilemma.

This week saw the United States Patent and Trademark Office publish Microsoft’s patent titled Transitioning into a VR environment and warning HMD users of real-world physical obstacles. Unlike a lot of patents VRFocus sees – like the recent Sony Shadow banning one – Microsoft’s is fairly recent, only submitted just over a year ago.

The Microsoft patent aims to solve two problems, where users transition when putting on a VR headset from the real to the virtual, and the aforementioned hazard issue. When it comes to the first task Microsoft suggests rather than using passthrough cameras which it says can be disorienting, instead, users will see a simplified replication of their own environment, helping them adjust by viewing something familiar; just digitally. Some sort of triggering event would then take them into the main experience. Whilst that might be useful when showcasing VR to complete newbies at an event, VRFocus isn’t too sure how many people would need this at home.

Real-world object tracking, on the other hand, is far more interesting. Microsoft proposes using a headset’s sensors to track real-world objects and actually bring them into VR as a virtual representation if you get too close. As the images highlight, that could mean a stationary object like a sofa appearing into view or even something moving like another person or a pet. The system could take into account a user’s velocity and orientation in relation to the object. So guardian systems would be active, rather than a passive wall.

However, this does open up the issue of immersion loss, as a real-world object suddenly being placed in your virtual one would be distracting – or maybe that’s the point. So one minute you could be deeply engrossed in a Half-Life: Alyxsession, fighting off headcrabs left and right then suddenly the pet pooch appears in the corridor wondering what the hell you’re doing.

Could this be a useful feature VR gamers would want? You’ll have to wait and see if Microsoft implements it into its Windows Mixed Reality (WMR) headsets as the patent is very much VR-oriented. 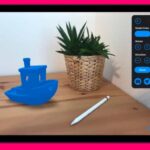