DigiLens has been around for decades, specializing in holographic waveguides as a supplier in the smartglasses market. Until recently, this market was mainly for militaries and niche business applications.

As you can guess, Design v1 isn’t a product you can buy, it’s a modular solution available to prospective DigiLens partners including “software vendors and IoT programmers”. It’s essentially a fully functional showcase of the company’s latest ‘Crystal50’ waveguide, which it describes as industry leading, as well as a developer kit for standalone AR.

Crystal50’s efficiency enables a HoloLens 2 class field of view in glasses-like form factor, with less darkening of real world light, and four times less “eye glow” so other people can see your eyes.

Design v1 is a standalone AR computer like HoloLens & Magic Leap – though its processor has smartphone level clock rates rather than laptop level.

Qualcomm offers two mobile chip tiers for AR/VR; XR1 and XR2. XR1 provides baseline functionality like tracking for headsets that tether to a phone or PC, whereas XR2 is a full-fledged flagship mobile system-on-chip (SoC) for standalone headsets.

Back in February Qualcomm itself showed off a reference design for an XR1-powered AR viewer which connects via USB-C to high end Android smartphones.

DigiLens is using the high end XR2 chip, the same used in VR headsets like as Quest 2 & Vive Focus 3. It’s running standard Android with DigiLens ‘Visualize Framework’ for developers to build on.

The architecture is modular: the included Coretronic 720p projectors can be detached to be swapped out with alternatives or future versions.

Facebook and Apple are working on AR glasses that are still years away and a key Microsoft leader recently reinforced his company’s interest in the consumer AR market. Still, there are still huge hurdles to overcome in terms of field of view and battery consumption needed to appeal to the consumer market more broadly. This reference design from Digilens is one step on that path, enabling an experience similar to HoloLens & Magic Leap in a cheaper, more compact form factor. 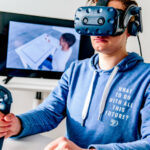 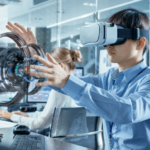 Your Guide To Use Virtual Reality In Equipment Training