With the uprising of remote working, companies and facilitators have found alternative ways to innovate and stay creative by “digitizing” their face to face interactions. This led to a great interest in new ways of working and collaborating by exploring new set of digital tools: videoconferencing, file sharing, digital whiteboards and virtual reality.

Over the past month I had the opportunity to moderate two workshops that, despite being very similar in structure, were “hosted” on 2 very different platforms: Miro (a digital whiteboard) and Spatial ( a VR meeting platform). This offered a great opportunity to compare the 2 sessions and I decided to share my findings focusing on three main aspects:

I will start describing the type of workshop that I moderated and conclude with some recommendations on how to explore these opportunities further.

A peek at the Backstage

The workshop chosen in this case is called Lightning Decision Jam (a.k.a LDJ) and was originally designed by Jonathan Courtney at AJ&Smart. This workshop can be used to get a few people together to define and solve a wide variety of challenges. Over time it got wide adoption and went through many iterations and changes (2017, 2018, 2020, 2020 remote edition) . One of the main characteristics is its very tight tempo: every stage of the workshop is time-boxed and limits the amount of conversation between the participants in favor of progress towards actionable solutions. Unlike other workshops that take multiple sessions or days, an LDJ runs within one hour. Given the current generation of VR headsets is still not suitable for long sessions (especially for newcomers), one hour represents in my experience the very maximum someone can comfortably spend in virtual reality for the first time.

The two teams were each composed of 5 persons. The one that experienced the workshop in Miro was the team at iconomy, a boutique consultation agency in Berlin and were all using this platform for the first time. The team that experienced the workshop in VR was composed of four European VPs and one director at an enterprise company. In this case everyone used an Oculus Quest 1 running Spatial, a VR meeting platform that allows to write post-it notes, have realistic avatars, play around with 3D objects and so much more.

The difference in the amount of preparation needed to run the 2 workshops was MASSIVE! Assuming a little familiarity with Miro, a moderator can set EVERYTHING up within minutes. Miro has already an LDJ template and inviting the participants is as easy as adding the Miro url to the meeting invite. Since all main functionalities rely on standard interactions like typing on your keyboard, moving objects by click and drag with your mouse, or copy/pasting objects with ctrl+c/ctrl+v there is no need for any training. There are also some opportunities to enrich the look and personalize a digital whiteboard but none of that is really required.

On the other hand setting up a VR workshop is a completely different story. Given that none of the participants had a headset, Spatial had to be preinstalled on each device and the hardware had to be sent to the participants spread all over the world (Germany, Netherlands and US). Manipulating objects is done with a controller that has different (unfamiliar) buttons, post it can be typed by voice and moving within the space is done via teleportation.

Consequently each participant had an onboarding session of 45 minutes to be introduced to the technology and how to interact within the environment. This, as well as the logistics of shipping headsets that were fully set up and ready to use prior the event, was masterfully managed by the VR Dept 071 and the guidance of Desiree Rosier and Wim Verveen. You can also read a little more on how to onboard newcomers to VR remotely here.

At the moment this article is written a VR moderator cannot count on a robust toolset as in Miro. Spatial doesn’t offer any timer or workshops templates with voting dots, frames etc. so everything has to be built from scratch: I used the video countdown as 5’ timer, little squares jpg as voting dots and recycled the frames from the Miro board that I would import at the appropriate time.

A good LDJ flows seamlessly between a series of stages: challenge identification, prioritization, reframing of the challenge, brainstorming solutions, another prioritization and a categorization based on impact and effort. Each step takes 3 to 5 minutes so there is a lot going on within a very tight schedule: post it of different colors flying around, voting dots being moved left and right and different frames that act like canvases to facilitate and structure the session. Despite the apparent complexity during the workshop there are just three things happening:

Writing and adding post it in Miro is as easy as it could be. On the other hand the experience of typing in VR is hideous… until you start using voice typing. After a few attempts every VR participant was able to add ideas to the board fairly quickly.

For someone that just started exploring VR as a new way of working this might seem like a given but trust me: this is a huge improvement from where we started.

Voting in Miro was not an optimal experience… but that was totally my fault. Let me explain. The LDJ template included off-the-shelf voting dots that I thought would be more than sufficient while still providing the feeling of adding little stickers to the post it… gosh I was wrong🤦.

The little dots were hard to grab, got deformed into weird shaped eggs, and ended up under the post it. It is not surprising that Miro had for all non-free plans a voting function that is a breeze to use and allows to set a timer, the number of dots available and really stick the vote to the post it. If you run these kinds of sessions regularly I would TOTALLY recommend to upgrade your free plan.

In spatial I tried to mimic the dots system with mixed results. Moving votes around felt nice led to some laughs and playful moments when participants were stealing votes from each other. On the other hand, accidentally grabbing the post it resulted in hiding all the votes that were behind it requiring me to quickly “save the day” and rearrange the situation.

In Miro the flow of the workshop was conveniently indicated by a series of arrows. Progressing was consequently done by moving to different sections of the infinite whiteboard and I just had to make sure to bring along some of the elements (a task made very intuitive by the fact that I could just area-select everything I wanted). In Spatial you are stuck with one surface so moving to the next activity requires to clean up the board (post it, votes and frames), making sure nothing relevant was lost and sometimes set up the next stage by browsing through the content folder. This process is made even more cumbersome by the fact that multi-object selection is not possible in Spatial (to see how VR creative tools have implemented that in their applications you can read this article).

“The show must go on”

From a participant perspective both workshops were very well received. The level of novelty added to that, and being able to break the routine with something new and creative is certainly a nice addition. Miro has become a jack of all trade and allows teams to collaborate and be creative in soooooo many ways but, despite the much higher barrier of entry, VR meeting platforms like Spatial offer a completely new experience. Participants feel a much higher level of connection (especially in circumstances where the alternative is staring at a bunch of switched off cameras) and the simple act of being in a new space virtually, breaks the zoom fatigue some of us are very familiar with.

It is also important to mention that this experience is not 100% positive for everyone. One of the participants had to remove the VR headset for a while to rest his eyes, while another mentioned that he experienced some fatigue and he was less focused towards the end.

When we instead look at the value added of running workshops like LDJ in VR (especially when we include the amount of additional preparation needed) I think the tradeoff is not worth it… yet. Yep you read correctly. I have been running workshops, seminars and events in VR since 2018 using a wide variety of platforms like Mozilla Hubs, Big screen, Glue etc and I think that simply copy pasting real life practices and experiences to the digital world is not the right way to go. I yet have to see a usable whiteboard in VR, but I still hear people begging for it as if it would be a killing feature. Similarly porting a workshop with post it in virtual reality is something that should be evaluated case by case. The LDJ was a good start but far from ideal: the amount of conversation and interactions between participants is minimal by design, the lack of an easy way to progress between different stages of the workshop made the experience a bit clunky and being in space didn’t add any “spatial” value. On the other hand if we think at a customer journey mapping workshop where participants can think and discuss, not sitting behind a desk, but immersed in a series of environments that change as the journey of the user progresses, then we are very close to something revolutionary.

And how do we get to that revolution? Experimenting and sharing your learnings…. Hence this article. I would like to end with some final recommendations for other fellow VR workshoppers.

p.s. As further prove of my 4th statement Spatial just got updated adding some features that (partially) address some of the issues mentioned above. These are really exciting time and if jumping on a running train doesn’t scare you this is REALLY the time. 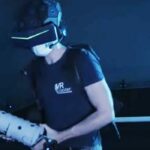 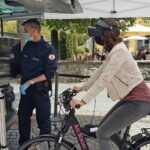