Augin is a digital platform where AEC professionals and companies can publish and view their content in augmented reality in the environment on a 1:1 scale.

Augin is software aimed at the AEC industry that uses augmented reality to provide platform users with a new experience in the visualization, presentation, and collaborating on the projects. The application was launched in 2019 in Brazil and quickly gained traction in Latin America. Today Augin app is successfully used in more than 175 countries, counting more than 140,000 active users.

The Augin app revolutionizes the way architects work – thanks to federated projects, BIM information, various viewing modes, and an ability to import projects through plugins and Augin Hub (PC version).
Democratizing access to augmented reality, the Augin app benefits the construction sector in multiple ways. The app allows avoiding losses and identifying executive errors immediately.
The interactive 3D project visualization facilitates a better understanding of the project for all stakeholders, including the end customers.

Launched in 2019 at Construtech, the largest technology event for construction in Brazil, Augin is a free application for Android and iOS capable of bringing 3D models and projects to augmented reality quickly and accurately.
The software transforms.IFC files and allows engineers and architects to filter and interact with information from BIM (Building Information Modeling) projects in the AR experience. The Augin app allows to automatically position projects in the environment, create experiences with videos in AR for catalogs and project plans. As the AR content is shown in the real environment, it offers direct interaction and 1:1 scaling.
With the recent launch of the Augin hub, the platform continues to evolve and bring more functionalities to the AEC sector. 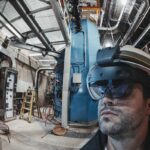 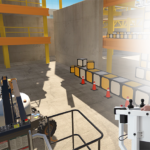