While use of the gaming technology for improving physical ailments is still in the early stages, it shows promise — and it’s fun.

This article is part of our new series on the Future of Health Care, which examines changes in the medical field.

Four years ago, Michael Heinrich was riding his motorcycle on the University of Michigan campus when a rotted tree fell on him and snapped his neck, causing him to permanently lose use of the lower half of his body. He spent weeks in intensive care and then went to inpatient rehabilitation for more than two months,

About halfway through his rehab stint, his occupational therapist, Michael Blackstock, asked whether he was interested in trying virtual reality for his therapy. Mr. Heinrich, now 26 — who is returning for his master’s at the university — was game.

“What I really enjoyed was being an eagle trying to go through rings,” he said, describing a virtual reality experience. “From an emotional standpoint, coming off an injury where I lost the majority of the use of my body, V.R. pushed the boundaries of what I thought was possible.”

Virtual reality, long used for gaming, has, over the past several years, moved into the health field for such things as pain management and relieving post-traumatic stress disorder.

And now researchers and therapists say it has shown great promise for physical and occupational therapy.

“I’ve been through P.T. for various injuries, and you know, sometimes I get home and I’m sort of like, well, I forget exactly what I was supposed to do,” said Brennan M. Spiegel, a professor of medicine and public health and director of health services research at Cedars-Sinai Medical Center in Los Angeles. “How am I supposed to set up my body for this? And also, do I have the motivation to do it right now? And V.R. can help both of those, both by reproducing precisely what that physical movement is supposed to be and hopefully providing some additional motivation to do the exercise.”

Using virtual reality for rehabilitation was growing before the coronavirus pandemic for a variety of reasons, including rapid advances in hardware and software technology and a younger generation of practitioners more comfortable using such technology. But the greater acceptance of telehealth during the pandemic has further spurred its use.

For one thing, it’s simply a lot more fun than traditional rehabilitation exercises. And “V.R. has this uncanny ability to kind of nudge the human brain in ways that other audiovisual media cannot,” said Dr. Spiegel, who is one of the foremost experts on the use of virtual reality in health. “The bottom line is it motivates us to do things that we might not be able to do.”

That’s what Pamela Pleasants, 59, found when she started doing virtual reality therapy for an injured shoulder. An associate dean at an independent school outside Boston, she learned that she was eligible to get virtual physical therapy, which she did through a company, XRHealth.

She did an intake over a video call with a physical therapist provided by the company, and then the V.R. headset arrived in the mail. Based on the intake, the therapist decided what applications — out of eight currently offered by the company — that Ms. Pleasants would use, as well as for how long and how frequently, and then trained her how to use them.

The therapist could also adjust all the settings within a program. For example, when Ms. Pleasants found the range of motion in one application caused her too much pain, the therapist adjusted it lower. The patient can change programs either using a controller or by eye gaze.

She loved the different programs, especially Balloon Blast, Ms. Pleasants said, which consisted of popping balloons with a virtual sword in each hand. “In the background was how high my range of motion should be.”

Ms. Pleasants also found the programs geared to reduce stress, such as a guided meditation while walking through a forest, very useful for her shoulder and mental health. She continued meeting her physical therapist on video calls semiweekly.

“After four months, my shoulder felt tremendously better,” she said.

XRHealth is one of the few companies focused on providing V.R. physical and occupational therapy at home; based in Boston, it is covered by many insurance programs in Massachusetts and nationally by Medicare. The company is working to get more insurance companies to cover its services. Without insurance, people can pay $179 monthly for the headsets and two physical or occupational therapy appointments monthly from a panel of therapists the company provides.

The company has all of its programs registered with the F.D.A., said Eran Orr, founder and chief executive.

Not all the programs offered for V.R. rehab are games; some clinics allow a patient to virtually practice real-life skills they may have trouble doing, such as grocery shopping or dishwashing.

To really push the use of virtual reality for physical and occupational therapy, “we’ll need to build a body of evidence that shows it’s effective, how we pay for it and how we can develop it in a way that’s easy to use,” said Matthew Stoudt, chief executive and a founder of AppliedVR, which supplies therapeutic virtual reality. “We have to be able to demonstrate that we can bring down the cost of care, not just add to the cost paradigm.”

While research specifically on V.R. use in physical and occupational therapy is in the early stages, an analysis of 27 studies, conducted by Matt C. Howard, an assistant professor of marketing and quantitative methods at the University of South Alabama, found that V.R. therapy is, in general, more effective than traditional programs.

“Does it mean V.R. is better for everything? Of course not,” he said in an interview. “And there’s a lot we still don’t know about V.R. rehab.”

Much of the research uses small samples with varying degrees of rigor, and more needs to be studied about how a patient’s activity in the virtual world translates into improved performance in the physical world, said Danielle Levac, an assistant professor in the department of physical therapy, movement and rehabilitation sciences at Northeastern University. Professor Levac researches the rational for using virtual reality systems in pediatric rehabilitation; many of the children she works with have cerebral palsy.

“We have to consider the downside of a lack of one-on-one contact with therapists,” she said. “I view V.R. as a tool that has a lot of potential, but we should keep in mind it should fit in — and not replace — an overall program of care.”

Robert Ferguson, a neurorehabilitation and therapeutic technology clinical specialist at Michigan Medicine, which is part of the University of Michigan, has treated numerous patients over the past four years doing in-hospital V.R. occupational therapy.

In fact, his first patient to use virtual reality was Mr. Heinrich, who made him realize the potential of V.R. to get patients to move in a way they — and their therapists — didn’t think they could. But, he said, clinicians must be well- trained on how to use the technology in the most helpful and effective way.

For example, he said, cardiac patients need to be closely monitored because people tend to work harder and longer on V.R. than in traditional therapy with a decreased awareness of pain, which could be dangerous for such patients.

One of the great benefits of V.R. therapy is that it can provide a stream of specific data to the clinician and patient on how often and how well the patient accomplished each exercise and where adjustments are needed.

And technology keeps pushing that boundary; a new headset by Oculus allows more degrees of freedom to interact with a virtual environment, and one just released by HP can track heart rate, pupil dilation and sweat.

Such tracking matters, because a doctor or technician can adjust the amount of exertion delivered to a patient.

While older people — who are more likely to suffer from strokes, Parkinson’s or simply falls, that will require physical or occupational therapy — may seem less able or more hesitant to use such technology, Mr. Ferguson and others say that typically isn’t the case.

“We’ve treated people from 18 years old up to 90,” he added. And in fact, V.R. therapy has been shown it can be particularly helpful for those with Parkinson’s and other central nervous system disorders.

And he has repeatedly found that people have unknowingly done things while using virtual reality that they didn’t think they could. He remembers a patient in his 50s whose leg had been amputated. He couldn’t balance when trying to do seemingly simple movements, such as pulling up his pants.

The man was a hunter, and Mr. Ferguson suggested he try a virtual reality program involving bow hunting. As part of the program, the patient was standing on one leg “and changing his center of gravity all over,” something he had not been able to do in regular therapy.

Foto: Michael Heinrich, who lost the use of the lower half of his body after an accident, undergoes virtual reality therapy. “From an emotional standpoint, coming off an injury where I lost the majority of the use of my body, V.R. pushed the boundaries of what I thought was possible,” he said.Credit…Michigan Medicine 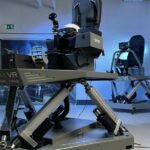 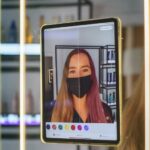