Virtual Reality and Augmented Reality Solutions for the Aviation Industry

Virtual and Augmented reality has become a great asset for aviation companies to provide better service and train their staff in a more accurate way.

Virtual Reality (VR) and Augmented Reality (AR) technology is evolving at a rapid rate and it is proving to be a powerful game-changer from every aspect. As a result, many diverse industries are now readily experimenting with this immersive technology to streamline their operations, improve capabilities, and train staff in a better way.

Given the expensive nature of the aviation industry and the high cost of making mistakes, VR has now become a great asset for aviation companies to provide better service and train their staff in a more accurate way.

In the years 2017, 2018 and 2019, there have been 59, 561 and 287 deaths, respectively, due to airline crashes and failures. While the fatalities due to airplanes have significantly reduced in the last 50 years, making airline travel one of the safest modes of transportation, there is still a long way to go. By improving training practices of the airline crew, VR technology can make the aviation industry safer, at reduced costs.

VR/AR in Aviation: Main Use Cases

Cabin crew training: Cabin crew staff aren’t just responsible for ensuring all the passengers are comfortable, but they are also responsible for ensuring safety. Before the take-off, cabin crew is expected to ensure all the equipment like flashlights, extinguishers, and life vests are present in the aircraft and working well. They are required to monitor the cabin for any smoke and suspicious passenger behavior. Moreover, flight attendants also need to demonstrate all the safety instructions before they take off.

By substituting classroom training with VR training, cabin crew can learn how to handle difficult real-life situations like medical emergencies, an imminent crash or hijacking through a virtual environment.

With the immersive VR technology, cabin crew staff is able to make mistakes in virtual training and learn from them, which directly leads to better on-site job performance.

Flight deck training: The flight deck crew includes the pilot and co-pilot who sit in the airplane cockpit. VR part task trainers help familiarize the flight deck crew with the cockpit and train them on the necessary skills needed to react quickly and handle even the most difficult situations. With a virtual environment and head-mounted display (HMDs), pilots can familiarize themselves with the cockpit controls and different scenarios they might face while flying.

In-flight entertainment: With the steady growth and advancements of virtual reality, airlines like Air France and Lufthansa are now using VR to offer immersive entertainment to passengers.

It’s normal for people to feel discomfort while flying due to other passengers talking loudly, babies crying or just the standard aircraft noise. This can in turn make relaxing and unwinding a struggle for many. While putting on headphones can help cancel out the noise, it’s not always easy to ignore your surroundings which can be very tiring for passengers flying long distances.

However, a VR head-mounted display along with headphones can give passengers the perfect escape to relax and take a breather even in a completely packed flight. With the help of VR, passengers can watch dreamscapes to help them sleep better or even the last football match they missed in a completely 360-degree video.

Aircraft maintenance and MRO training : With virtual reality and augmented reality, it becomes possible for aircraft mechanics and MRO technicians to learn to inspect different parts of the aircraft even without leaving their desks. One of the largest manufacturers of aircrafts, Airbus, is using the VR technology through its portable RHEA kit which comes with a virtual reality headset, touchpads and infrared cameras that allow its mechanics to inspect and repair aircrafts in a completely immersive environment.

Celebi Aviation Holding : As part of its focus on learning and development,  Celebi Aviation Holding set up an Aviation Academy in Turkey with VR solution. Tecknotrove has designed the VR solution for training and assessment for aircraft and apron inspection for Celebi. Unlike traditional learning experiences, the VR training module places the user inside a virtual airside environment to learn and interact with a virtual aircraft, different type of aprons . The VR module enables training in multiple scenarios for pre arrival, post arrival, pre departure and post departure inspection. The module focused on fault identification on the apron and the aircraft, learning the correct course of action in case of an identified fault, working under different environmental conditions, under LVO and night operations and more.

Lufthansa: Lufthansa uses VR technology for in-flight entertainment purposes by offering its passengers a 360-degree immersive video viewing experience while traveling. The German airline also uses VR in order to encourage more customers to upgrade their seats from economy class to business class by showing them the 360-degree video of what it is like to fly in business class.

SIA Engineering Company: SIA Engineering (SIAEC) is among the largest independent MRO. The company is investing in next generation training aids, including virtual reality solutions that can simulate actual on-ground scenarios within a safe and controlled environment. The company is using technology to train its pushback operators, baggage handlers, airside drivers and line maintenance teams to improve the safety and the aircraft turnaround times.

Air France: Air France is offering immersive entertainment to its passengers through head-mounted displays and VR videos. By partnering with SkyLights, Air France has created a special headset for passengers that fly on its Airbus A340.

SATS: SATS introduced the augmented reality technology to their 600 employees at the Singapore Changi Airport. With the help of these AR glasses, the ramp handling workers can scan QR codes placed on cargo containers to see the baggage loading instructions (flight number, placement location, etc.) in real time. SATS estimates that the loading time for an average twin-aisle jetliner will shorten by 15 minutes per flight because workers won’t have to use paper and will always know what goes where thanks to AR.

Japan Airlines: Japan Airlines (JAL) uses VR technology to provide better training to their aviation mechanics and improve their skills. The VR training simulation programs help mechanics and maintenance engineers to get more familiar with the engine’s run-up procedure in a virtual and yet very realistic environment. Moreover, aviation mechanics also get the opportunity to test their knowledge in different scenarios, identify their mistakes, and work on them.

Future of VR/AR in the Aviation Industry

It is estimated that the virtual reality and augmented reality market in aviation will grow by more than $1372 million by the end of 2025 with a compound annual growth rate of 61.2 percent.

VR in the aviation industry is clearly here to stay. Companies that readily adopt it will stay ahead of the curve. Whereas, companies that do not leverage VR at the right time risk falling behind their competition. 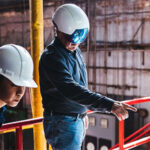 7 Ways to Benefit from VR in Construction 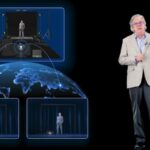