What To Expect From Apple In The AR/VR Space

Apple fans have long been waiting for Apple to launch its own augmented and virtual reality (AR/VR) wearables, and despite many competitors already presenting market-ready AR glasses and VR headsets, there are still more questions than answers around what Apple’s AR/VR first product will look like.

Apple has been discreetly working on a number of AR/VR products for several years now, and has acquired a number of companies in this space in the past, including Metaio in 2015, Flyby Media in 2016, Vrvana in 2017, Akonia Holographics in 2018 and NextVR and Spaces in 2020. Most recently, it was revealed that Apple also quietly acquired and absorbed Camerai, an Israel-based specialist in AR and camera tech. It is clear that Apple is planning to be a big player in the AR/VR space, but is yet unclear how its products will look like. Here’s everything we know so far on what to expect from Apple in the AR/VR space:

Tech analyst Jon Prosser has already leaked that Apple is working on a set of AR glasses, currently set to be released in 2023 at the earliest (though some industry insiders claim that initial small-volume production of the glasses will start as early as 2021). The glasses were previously expected to be released in September 2020, though the global COVID-19 pandemic may have been among the factors that pushed the exciting unveiling further into next year.

Prosser suggested those will be called “Apple Glass” and be offered at a starting price of $499, significantly more affordable than some of the existing alternatives, by Google and Microsoft, for example, which are more enterprise-focused. Apple Glass is also claimed to be the first smart glass to optionally include prescription lenses, though those would come at an additional cost.

The glasses are claimed to include a LiDAR sensor to enable 3D depth-mapping and both lenses will have screens, but no cameras. The glasses are expected to place AR objects on top of the real world (through Apple’s existing ARKit technology) and be gesture-controlled, though the degree and sophistication of such control remain unknown. They will be wirelessly charged on a special stand.

As per the leaks, all of the Apple Glass data processing will be done on a connected iPhone, similar to what we saw with the first-gen Apple Watch. While may be disappointing for some, this should not come as a surprise, given the affordable price point, and considering the fact that this will be a first-generation product. Those who have been around for a while may have noticed that Apple’s growth strategy has been selling more devices to its existing customers, rather than acquiring new customers, which makes the Glass-iPhone dependency even less of a surprise. Siri, Apple’s voice assistant, is also expected to be incorporated into the Apple Glass, suggesting that it will greatly interoperate with a user’s iPhone as opposed to being a standalone device.

In addition to the lightweight Apple Glass, rumor has it that Apple is also working on a more robust ‘wireless AR/VR headset, to be released in 2022, prior to the release of Apple Glass. This represents a much more ambitious move by Apple to try and gain dominance in the AR/VR space; a bold step and focus shift that allegedly created some internal turmoil within Apple.

This new Apple headset is expected to resemble Facebook’s Oculus Quest VR headset but be made of lighter-weight materials so that it is comfortable to wear for extended periods of time. It is also expected to have it’s own section in the App Store, with dedicated games and applications, as well as have Siri assist the user via voice commands.

Apple’s AR/VR hybrid headset will reportedly have a ultra high-resolution display as well as advanced external 3D-sensors, to allow it to map the various surfaces and dimensions of every space with greater precision than the current technology offered on the market. The headset is claimed to have advanced speaker systems and motion detectors, as well as AR cameras that will obscure people standing behind virtual objects, a key feature to ensure a superior VR gaming experience.

Most intriguing is a certain patent granted to Apple that may also hint that its AR/VR headset will include a vision auto-correct feature, allowing users to use the headset without their own glasses, thanks to the headset itself auto-adjusting its lens to account for vision defects.

We at echoAR can’t wait to see what Apple would do next in the AR/VR space. Next week, Apple is expected to announce iPhone 12, which will include high speed 5G wireless connectivity, a technology which would amplify AR/VR capabilities and would improve the quality of interactive AR/VR experiences. Our 3D-ready cloud platform helps manage & deliver AR/VR content to apps & devices everywhere and, with our future-proof RESTful API, developers can already start building an AR/VR app backend that will be compatible with Apple’s next AR/VR wearables and 5G devices from day one. 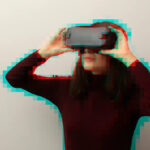 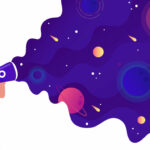