Is this the future of VR? Social interaction in a virtual socially distanced world

Back in 2020, we reported that Peter Chou, the former CEO and co-founder of HTC was working on a new virtual reality headset.

Known as XRSpace Manova, this new headset was being crafted to offer virtual reality to the masses but with a difference.

Rather than being gaming focussed like the HTC Vive or business focussed like Microsoft Hololens, the Manova was designed to bring people together, socially and in VR.

The idea here is to create a device that’s not only appealing to the masses, but also helps people connect, collaborate and come together in the virtual world.

The first part of this puzzle is an untethered, 5G powered, hand-tracking capable virtual reality headset that’s easy for anyone to pick-up and use. The second part is an immersive virtual world that offers social experiences suitable for everyone.

Is this the future of virtual reality?

In the midst of the COVID-19 pandemic, where we’ve all been stuck at home all the time unable to see people, the idea of a socially-focused VR headset is an appealing one.

We’ve seen some social elements in previous VR headsets in the past. Where you can get together to watch Netflix in VR with your pals or meet up with virtual avatars and even meet strangers from around the world in VRChat. But where other headsets dabble with this social interaction, XRSpace Manova is making that the main focus.

Put on the headset and you enter a virtual world with both public and private spaces to explore. Yes, there’s the classic virtual home that you can customise to your personal taste and invite people into for private chat but there are also public spaces that include a city centre, beach, fun park, night club and more.

At those locations, you can take part in various social activities and experiences or just meet up with friends to keep in touch without having to leave the house.

We were given a tour of these various locations and given a demonstration of the potential use cases as we visited each spot. And it’s once you’ve seen the possibilities that you realise the potential for the future of VR.

After selecting the location from a virtual map, we found ourselves in a night club, with music playing and bots chatting away happily to one another.

Here people could meet up for a virtual drink, dance or just to hang out with each other. A simple idea but one that’s easy to access and a welcome one when you can’t go out to a real pub.

Moving on from the club, we teleported into a virtual classroom where we were shown how a virtual speaker could give a presentation on a large virtual screen. That presentation is designed to be user-friendly, with presenters able to simply load files from their Google Drive account and show them off to a captive audience.

That virtual classroom is also able to be split into separate teaching areas, where users can gather for team chats, smaller presentations or talks and in a private mode where groups aren’t interfering with each other as well.

Later on, we were in a cinema watching both 2D and 360-degree video content. Any footage you have on your device is potentially viewable in this way, both on your own and with friends. The company is also working with local telecoms companies to enable to users to watch content from Netflix and other streaming platforms in the future as well.

These experiences were offered as just a taste of the potential applications of XRSpace Manova and what it could offer. The various virtual environments could be easily be used for commercial applications in a variety of different ways.

An estate agent could offer 360-degree virtual tours of a house without potential buyers actually having to leave their own home. Similarly, users could get a taste of what a chosen holiday destination might be like with a virtual experience that would give a much more accurate representation of the location than you’d get from simply looking at photos on a website.

For education, XRSpace Manova could be used in a number of ways too. Not just virtual classrooms, but guided virtual tours of historic exhibitions, educational art shows, presentations from prominent speakers and much more besides.

We were shown the possibility of virtual exhibits too. With virtual locations where exhibitors could show off their products or business offerings to an interested audience who didn’t have to worry about the costs and hassles of international travel to attend such an event in the real world.

For the average user, there are plenty of other experiences too. There’s a regular calendar with events for people to attend and „Digital Wellness“ experiences available through MagicLOHAS which offers things virtual Tai-Chi, body stretching exercises, Yoga, aerobics, cycling and more all within the VR world.

We’ve been focussing on the experience of what XRSpace Manova is like to use as that’s the main focus of this new headset – the social experience. But obviously hardware matters as well.

The XRSpace Manova headset is a mobile-powered device with a Qualcomm Snapdragon 845 processor, with 6GB of RAM, 5G, LTE and Wi-Fi connectivity. It’s wire-free, without that need to be tethered to a PC.

It’s also designed to work without controllers for the most part, with intuitive gesture-based controls that you can use with just your hands. There are trackers that can be added to the system to track full-body movement for things like sports activities but otherwise, it’ll allow you to walk and navigate your way around the world with ease.

Strapping on the XRSpace Manova headset your put into the body of a custom virtual avatar who not only has a moving mouth to match your speech but is also able to shake hands with people, high-five other users, wave and much more besides.

The headset design is cleverly thought out, with a comfortable fit, a cooling fan to keep it running nicely and a noise-canceling mic so you can always be heard clearly.

It can also be plugged in and used while charging too, so you can keep using it for longer as well.

Is this the future?

We were impressed with what we’ve seen of XRSpace Manova and we can see the potential use cases of it and how it could be an excellent way to meet with people from around the world with ease.

It’s easy to see where the XRSpace Manova will shine: the educational uses, the social experiences, the applications for businesses and the workplace. All are valid and interesting in a number of ways too. If schools are shut, the XRSpace Manova could be used for remote learning. Homeworkers could also use XRSpace Manova to collaborate more easily with colleagues and customers. Businesses could use the device to remotely demonstrate and sell products and services too. The possibilities are almost endless.

That said, XRSpace Manova may be a hard sell for a mass market. Especially with breaking from the norm of devices like the Oculus Quest line-up where gaming is the main aspect of the experience. The XRSpace Manova headset offers very little in the way of gaming except for a handful of casual games like Angry Birds and instead is all about the social engagement and experiences with others.

If you miss being with people then it might be a sensible purchase – assuming that all your friends and family have one of course. But if you want something to escape the humdrum of reality then this might not be it.

Either way, the future is interesting. Find out more about XRSpace Manova here. 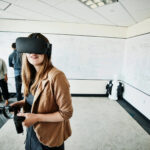 Bank of America is bringing VR instruction to its banks 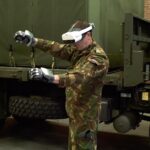