Vidiyo Makes The Lego Part Feel Like An Afterthought

The Lego part feels more like an afterthought, but dropping AR minifigures in your home can be fun.

I set up a little mermaid on my table and scan it with my phone. Minutes later, my kid is tapping buttons on-screen, making pirates and mermaids dance and turn into pandas in time to a song. He’s delighted with what he’s made. I might… want my phone back.

I’m in two minds about Lego’s newest partnership with Universal Music Group, the oddly spelled Lego Vidiyo. In one sense, it feels like a big music group reaching to license its tracks to yet another toy. In another sense, my 8-year-old now wants to buy all the Vidiyo minifigures.

Vidiyo, which launches in March, isn’t Lego’s first trip into the world of augmented reality. Previous Lego sets used phone or tablet apps to overlay virtual things with real bricks, with mixed success. The most ambitious of these, a series called Hidden Side, almost felt like a blend of video games and real bricks brought to life.

This is a lower-key approach. Instead of expensive sets, Vidiyo has packs of minifigures, or slightly more fancy minifigures plus display boxes. These figures — rock band avatars, representing various genres of music — include little plastic tiles with pictures on them, which the Lego Vidiyo app can scan. These are called „BeatBits,“ and they unlock special effects in the music video-creating app you use later.

I’ve been trying an early set of Vidiyo figures, and the Lego designs are fun. The app itself feels buggy and confusing so far (it’s early days, and a beta app). I tested it on an iPhone 12 Pro. The app’s social focus for kids means creating an account that parents can moderate. Video clips created on the app can be uploaded in chunks up to 20 seconds. Lego promises moderation of content on its end before posting, but it’s a little weird to think of little kids (ages 7 to 10 is the focus for Vidiyo) and social mixing, even in a closed Lego app ecosystem.

The app has a variety of Universal Music artists, like Imagine Dragons, Katy Perry and The Weeknd, and 1-minute clips of their songs, which can be picked to be the background of a music video. Any minifigures you scan in can be added to a band, with its own name and background art. The video „performance“ involves dropping an AR version of your figures into your room, at three different scales (tiny desk-size, medium doll-size or human-size), and layering effects on top by tapping effects buttons: pixelating the background, turning everyone into pandas, making everything underwater. It’s random, in a Lego kind of way.

Figures are scanned in-app on phone or tablet, unlocking the effects.

Effects are unlocked by scanning those plastic tiles, which come three to a box for the minifigures, or 16 for the larger display boxes. It’s a matter of collecting figures and effects and then seeing what you’ve got. The music app with its video-effects buttons sort of reminds me of Harmonix music gaming experiments like Dropmix and Fuser, but you’re not remixing the songs here… you’re just creating video effects.

The problem I have so far is that the music video app doesn’t have much to do with the Lego sets. Make your minifigure, and you’re done. From there on in, once you’ve scanned everything in, it’s just a phone or tablet app. The AR overlays of the figures in the real world are clever, and sometimes magical, but I’ve seen more advanced AR in other apps, and Lego’s Vidiyo app seems a little buggy in its early build: figures aren’t recognized in scans; and it seems very particular about floor or desk space dimensions that can be used for performances.

AR figures appear on your desk or your floor in three different sizes. Effects are layered in at a touch.

And then you have that other problem: Is your kid borrowing your phone? Or are they lucky enough to have their own AR-ready iPad? Either way, it’s more screen time for a kid that’s likely to already be swamped in screens.

That being said, Lego’s at least making these little bits and pieces more affordable, instead of an expensive $50 to $150 series of sets. It’s just that, compared to a far more interactive and nearly screen-free Lego Mario set I played with last year, Lego Vidiyo looks like it’s steering totally in the other direction. My advice: Get the minifigures if you think they’re cute and want to collect some. The app is just a bonus, and while my kid had fun creating music videos in it, I’m not sure how many times he’ll ever really go back to it.

Lego Vidiyo puts life-size minifigures in your house. (A beach ball got in the way of a photo opp with my son.) 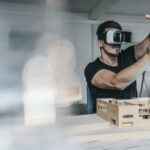 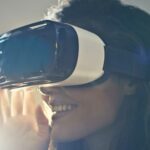