A simple Google search for “Conferences in 2019” brings over 250,000,000 results in 0.64 seconds: conventions, trainings, trade-shows, inter-governmental meetings, corporate retreats. What has been the fate of these events merely a year later?

Many cancelled. In fact, the $100 billion conventions industry essentially shut down for large parts of the year.

But is there another option, really?

For over 46 years, the California Wing of the Civil Air Patrol has conducted its annual Cadet Programs Conference in San Luis Obispo, California. The event brings over 500 cadets from ages 12 to 21 each year for networking and professional development.

In June 2020, it became clear that hosting the 2021 conference in person will not be feasible. Virbela was selected as an alternative to traditional online conferencing tools.

According to its website, Virbela creates virtual worlds with social spaces that people may miss when working from home, learning remotely, or using basic online conferencing. Since 2012, the company has been “engineering and designing immersive 3D environments that provide the presence and emotional connection of being together in person.”

Using this technology, the Civil Air Patrol hosted young cadets in a virtual world constituent of expansive conference centers, auditoriums, pavilions, classrooms, and even a beach with a lighthouse.

Participants received the ability to create virtual avatars — complete with an assortment of wardrobe staples. They could interact in real-time with any of the hundreds of other virtual personas. The platform provided spatial-audio technology, which created an immersive audio-visual experience. Attendees could walk (or teleport) between classrooms. And when their avatars bumped into each other, it became normal to say ‘sorry’ or ‘excuse me’, one participant said.

Between plenaries and networking, a social event brought dance, music and fireworks against a moonlit night sky. It seemed that workplace formalities were meshed with real-life simulations seen in video games like The Sims. Peculiarly, it worked.

Accessible, Affordable And Yet Limiting

In terms of numbers, the VR platform made the conference more affordable. For a physical event, each participant’s expenses could account up to $150 in meals, facilities and physical costs, CAP said. The VR platform, in comparison, costs $75 per head.

Accessibility was also a plus. Young people across the country, who would not have otherwise been able to attend in person due to travel costs or scheduling, were present at the click of a button. More time was dedicated to educational content as travel time between seminars from one end of the virtual campus to the other was negligible. Physical lines of time and space were blurred to strategic advantage.

Downsides did not go without notice either. With weather-related power outages across the United States, several participants could not access electronic devices. In addition, not all participants possessed computers meeting minimum technical requirements or optimal internet speeds to run the VR platform.

Between Black And White — The Gray Area

Sandwiched between pros and cons is the gray area of a world that is undoubtably Black Mirror-esque. A world that glimmers with the hope of totally shifting to a virtual realm — where rules, norms, privileges, taboos will differ materially. The governance of this ecosystem will be decentralized, which presents lack of oversight and discomfort with uncertainty.

But opportunities persist: normalizing virtual reality as a corporate tool in place of traditional online platforms may be valuable. For customer-facing retail firms, virtual augmentation can increase buyer confidence. For product teams, virtual reality can facilitate engineering. For human resources, onboarding can move beyond rudimentary e-trainings and into fully integrated virtual immersion (Walmart is already adopting this). For educators in the midst of a pandemic, online classrooms can transform into 3-D virtual lecture halls with state-of-the-art technology. For healthcare professions, next-generation simulations can amplify existing research and innovation.

Ultimately though, the question with this technology is not if, but rather when it will be implemented. Equitable adoption of virtual reality will require tremendous resources in an already asymmetric technological landscape. But this is not a problem of capital investment; money follows innovation without fail. Instead, it is a problem of human perception. And of the inescapable reluctance associated with impending change. 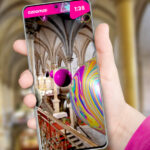 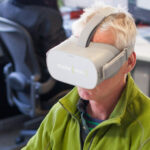