Known for its immersive work with fields such as architecture, aerospace and entertainment, Theia Interactive’s latest project is Bigroom, a collaborative virtual reality (VR) tool for Unreal Engine. This week the company has announced it’s been awarded an Epic MegaGrant to continue development.

The second MegaGrant Theia Interactive has received from Epic Games’ initiative, how much remains undisclosed. The money will aid the expansion of the team thus helping to expedite research and development. Currently, in a closed beta, Bigroom allows Unreal Engine developers to meet withina project and edit the design together in real-time whether that’s in VR or via desktop.

“Theia is working toward bringing real-time rendering and collaboration tools to the virtual design review process for multiple industries,” said Bill Fishkin, founder & CEO of Theia Interactive in a statement. “This Epic MegaGrant will help us improve the integration with Unreal Engine and deliver the next generation collaborative VR platform with BigRoom.”

Bigroom includes a range of features to aid architects, project managers and designers in the creative process. These include configurable and customizable options to help scale a project, presentation boards for easy visualisation; 3D scale models suited to VR, bookmarking and comparison tools, and task lists and Post-It notes.

After starting as a visualization company in 2014, Theia Interactive launched Optim in 2018, an Unreal Engine tool to help speed up content creation and improve workflow. With BigRoom still in development, the company has revealed it’ll be conducting an open beta soon.

Remote collaboration is nothing new in the VR industry, especially over the past year as more companies have looked for new ways to connect other than video calling. From industrial apps like SkyReal or product design platform Gravity Sketch, all the way up to full international conferencing abilities, the ability to virtually communicate has never been easier. 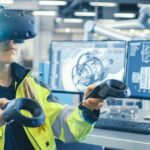 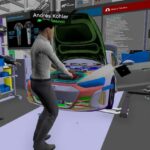