Virtual reality (VR) is a simple term that refers to and describes a variety of technologies associated with immersion into a simulated 3D environment. It can be considered primarily as the point where human-computer interaction, computer graphics, computer visions and 3D sensing meet.

Once virtual reality engines were associated with gaming only, but now it has gained momentum in all industries. VR in the enterprise and consumer sector has taken the world of tech by storm. It has transformed from a figment of science fiction imagination into a billion-dollar business. According to expert estimations, the virtual reality (VR) market is forecast to reach 18.8 billion U.S. dollars in 2020, representing a 78% increase in spending from last year.

Virtual reality app development has become a highly competitive space, with several companies offering excellent VR engines for businesses and other large enterprises. With so many VR options available in the market, it is easy for company executives to get confused about the best ones that suit their business. We will look at some of the best VR engines for enterprise applications.

The good thing about this VR engine is that it has numerous enterprise applications. You can use it for cases such as employee education, training simulation, retail & sales, virtual concierge, and field services productivity,

Some of the powerful features of Amazon Sumerian include;

Amazon Sumerian offers several learning resources that make it easy for you to use the VR engine. The resources have valuable information for virtual reality developers.

Maya is one of the most widely used VR enterprise applications. The R software development tool from Autodesk is used for various purposes including D animations, motion graphics, and VFX software.

It is currently one of the most powerful VR engines as it is used for various functions such as dynamics, 3D rendering, effects, 3D animation, 3D shading, 3D modelling, motion graphics, pipeline integration, and more.

Unity is a popular VR engine as it allows you to develop solutions for various sectors. With Unity, you can create VR solutions for sectors like automotive, transportation, manufacturing, media & entertainment, engineering, construction.

The tool comes with numerous perks for developers such as;

Google VR for everyone

Google VR is the engine developed by the search engine giant, Google. The development tool allows you to create an immersive VR experience for your company. The tool and other VR engines are available on the Google VR developer portal.

The Google VR engine can be used to develop VR tools on numerous platforms such as Android, iOS, Unity, Unreal, and web. Google has software development kits (SDKs) for the various VR platforms it supports and can be accessed easily.

The Google VR offers numerous perks, which include;

Using VR for your business can open up a whole new market for you. The VR engines discussed in this post are some of the best for enterprise applications. They allow virtual reality app development for different purposes and on multiple platforms. 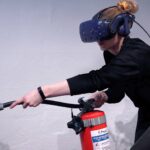 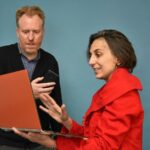