The ‚Virtual‘ Future Of Holocaust Education Is Here

From recreating the Nuremberg Trials to a virtual reality ‘walk-through’ of Auschwitz-Birkenau, new gaming technology is replacing face-to-face encounters with Holocaust survivors.

Some designers of virtual reality (VR) are doing what was long considered verboten in Holocaust education: they are recreating aspects of the genocide so users can “experience” those dark years from the comfort of VR headsets.

From hiding in the “Secret Annex” with Anne Frank to digging mass graves at Auschwitz-Birkenau, many aspects of the Holocaust have lately been featured in VR-based games and simulations. The technology has even been used as evidence against a Nazi war criminal, when a VR simulation helped demonstrate the defendant would have been aware of killing operations at Birkenau.

With increasingly fewer survivors around to give in-person testimony, VR designers are preparing for the day when eye-witnesses to the Holocaust will no longer be among us. Not all of the simulations, however, are received with high regard.

“There is always a risk that technology will be used for the wrong purposes, which is why education is so important,” said Thomasz Majewski of Real Invented Studio, the creators of the “AuschwitzVR” application.

In an interview with The Times of Israel, Majewski said, “Games are not bad in themselves. Today they can be a great didactic tool. We have many examples of educational games. It is a huge responsibility for creators to never cross this line between common sense, respect for the subject, responsibility and ordinary cheap entertainment.”

Two years ago, the VR game “Witness: Auschwitz” was accused by some Jewish game critics of going beyond the pale. With a claim that “users will participate in the daily horror of the extermination camp,” the game resembles a “Choose Your Own Adventure” spin through the German Nazi death camp where one-million Jews were gassed and burned.

In a recreation of the crematorium building, for example, a row of brick ovens extending from where an elevator brought corpses up from the gas chambers below. There are no people or fires or anything else in the window-lined room, nor chance to “participate” in anything.

In Majewski’s assessment, deploying the latest technology is essential to capturing the attention — and imagination — of young adults who will never meet an eye-witness to the genocide.

“This form of education allows various institutions to go beyond the walls of their facilities and reach the individual recipient very directly,” said Majewski.

“While watching movies, reading books, examining photos and documents or using any other form of traditional reception, a certain barrier is created that separates us and our experience from the events we are participating in,” said Majewski. “Virtual reality connects us with events, people and facts at a much higher level of immersion.”

As an example of effective VR-based Holocaust education, Majewski pointed to virtual 3D holograms of Holocaust survivors he saw at the Swedish History Museum in Stockholm.

“They are a great example of how technology allows immersion to a very high level. Looking into people’s eyes, hearing their testimonies — even if they are just holograms — creates a strong relation. We hear louder, we sympathize more, we learn more,” said Majewski.

‘A much deeper understanding’

Since 2012, the USC Shoah Foundation has helped create a series of hologram-based survivor testimonies. Some of them are deployed at museums where visitors can ask questions of — for example — Anne Frank’s stepsister, survivor Eva Schloss.

Called “Dimensions in Testimony,” each of the holograms requires 360-degree filming with a rig of 112 cameras. Survivors must give their testimony many times  so the hologram will be able to “respond” to many questions.

In addition to the limit on how many survivor holograms can be created, there is a limit to the reach of most VR projects. A NYC museum-hosted VR simulation about a survivor of Majdanek — called “The Last Goodbye” — can only be experienced by one person at a time, for example.

According to one expert in VR game design, some of these barriers are starting to fall away.

Holocaust survivor Aaron Elster speaks to reporters as he is displayed on a three-dimensional hologram at the Take A Stand Center at the Illinois Holocaust Museum & Education Center on Thursday, October 26, 2017 in Skokie, Illinois. / AFP PHOTO / Joshua Lott

“VR technology is still in its infancy, but we can already see with new products such as the Oculus Quest that headsets are going to get smaller, cheaper, lighter, and more portable,” said Thompson in an interview with The Times of Israel.

For several years, Thompson and colleagues have been working on their own contribution to VR-based Holocaust education. Their interactive “Courtroom 600” experience uses VR to engage adult learners in understanding the Nuremberg Trials, during which some key Nazi war criminals were convicted.

Through the trial evidence and related materials, Thompson and the “Courtroom 600” team are seeking “to create an experience that heightens awareness of the need to recognize and resist anti-Semitism and other racial ideologies in our own times,” he said.

The post-WWII Nuremberg Trials in Germany, during which some of the Third Reich’s top war criminals were tried and sentenced by the Allies (public domain)

“Learners are placed in a three-dimensional, human-scale reproduction of Courtroom 600, where they can interact with the historical participants as well as pause the courtroom action to delve into contextual information and archival materials related to the people, places, and events central to the trials,” said Thompson.

Blending VR with game design and public history methodologies, “Courtroom 600” seeks to give learners a greater “sense of scale” when confronted with the magnitude of Nazi crimes.

“On Yom HaShoah, we often use objects to stand in for large numbers of people,” said Thompson, who has worked on several projects that apply VR to history.

“When I went to university at Rensselaer Polytechnic Institute, we had colored flags placed in a football field. We do this because it is hard to explain large numbers to people. In VR, we can provide a much deeper understanding of scale that conveys certain aspects of history,” said Thompson.

USC Shoah Foundation head Stephen Smith said this use of VR “represents a new way of capturing truth for the future,” in an interview about “The Last Goodbye” VR project.

“We aren’t afraid to push boundaries, but we are carefully considering using any innovation so that the awe of technology does not overtake the story,” said Smith.

Foto: Amanda Friedeman takes a question from a student directed to Holocaust survivor Adina Sella, as she is displayed as a three-dimensional hologram at the Take A Stand Center in the Illinois Holocaust Museum and Education Center on October 26, 2017, in Skokie, Illinois. (Joshua Lott/AFP) 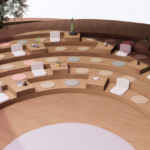 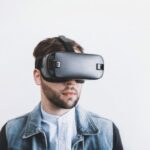