Quest Gets Passthrough+ API For AR Apps Like Spatial

Both Oculus Quests feature four ultra wide angle monochrome cameras. The system uses them for positional tracking and controller tracking, but you see the real world through them when setting up the Guardian system or by double tapping the headset. This is known as video passthrough.

It’s called “Passthrough+” because it uses computer vision algorithms to fuse the view of two of the cameras together into a depth-correct view. That’s needed because the physical cameras are actually very far from your real eyes. If their raw output was shown the scale and perspective would be wrong – you’d get a headache over time.

Remote work & meetings software Spatial already has access to the new API, and shared a short preview of it in action. Note that while this API will let developers superimpose virtual objects into the real world, that doesn’t in any way require those devs to get access to the camera feeds.

Facebook isn’t giving any concrete details yet, but says it will share more on the feature next year. It’s possible this move could see it effectively become a dev kit for Facebook’s future AR ambitions. 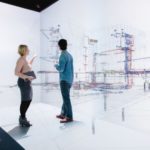 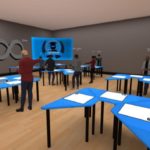 ILN: The Advantages of a Digital Twin Virtual Reality Campus