Case Studies: The Laws Of UX In AR

As technology is improving and getting more affordable, Augmented Reality (AR) has been constantly gaining popularity. From enterprise products like Google Glass Enterprise Edition 2, Microsoft HoloLens 2 and Magic Leap, to consumer available devices like AR-ready mobile phones and browsers, it has provided users with an immersive experience through the use of AR. But at what cost? Does having an Ironman-esque interface really provide a better experience? Is AR the solution for everything since it’s trending?

The State of AR Today

From the word ‘augmented,’ a device will project or embed a digital object or information on the screen, simulating as if it was in the real world. AR comes in different forms and sizes but most of them have a few things in common:

1. Devices must be AR ready in order to ‘project’ the digital object on a real environment or object.

2. May need markers or trigger spots in order for the digital items to be embedded into reality.

3. Apps may need to be downloaded for the digital items to be embedded into reality without the use of markers.

Regardless of which form AR takes, developers have already explored and played around with the technology. Most of which are extremely brilliant ideas and were executed excellently but somehow has forgotten about the user experience side of things. At this point in time, AR is more of a tool and or a gimmick for most users. You will get users to use AR at most 5 minutes, 10 might be a stretch if they are playing an AR game like Pokemon Go. Players even have disabled the AR feature of the game to save battery.

At first glance, it is a brilliant concept displaying information about the local subway lines and the stops of different tracks. The developer can even extend it to display where the passenger is currently and how to get to their destination. However, one has to consider the barrier of entry on how passengers would get to use this AR feature. The passenger must first and foremost have the app to display AR. Another requirement would be an internet connection, most underground subways lack a good internet connection. These could be factors on hindering passengers to use the AR feature.

Another brilliant concept on connecting the physical and virtual world by creating swatches in the digital world, to control and change the color of smart lights such as a Philips Hue lightbulb. It is a nice idea to play around with mobile devices and see physical objects change to your liking. However, the idea and the need of pointing a mobile device on a smart light just to change the colour and intensity of the light is quite silly. The user just needs to change the settings with minimal swipes and or taps.

The idea is good and well executed. People do want to know what they are paying for in restaurants. Why not visualise the food first before buying it and look at the reviews? However, the user still needs to download the app and must be connected to the internet to view the virtual menu. This could be a barrier of entry, especially for those who are just hungry and would like to order food. It’s quite silly to hold the menu and your mobile device to see the virtual menu.

Not all AR projects are and will be successful despite the trending technology. There are a few critical items to consider to have an effective AR project.

Trying to be the Swiss Army Knife of AR could be the downfall of the project. The idea of creating an AR project should be trying to solve a problem, making a task easier, or have a simple goal for the users.

Because most AR projects require apps to functionally run perfectly, think of how to get the users to download the app or get to the AR project. There are a lot of ways to onboard users but not all of it would be the right solution. The most simplest and most common barrier of entry is the use of QR codes.

If a user has passed the initial barrier of entry, the AR project must be easy to use and easy to understand. Not only that the project must intuitively guide the users how to use AR, but must be able to use it with minimal instructions due to the screen real estates are quite limited. Bombarding a mobile device screen with icons and instructions on how to use the feature can discourage the user from using the app.

This is the common pitfall for any AR project. Designers and developers may at times have gone overkill and just have dumped everything on the screen. Screen real estate is quite limited and trying to bombard the users with information could be another hindrance of the project. Only show the needed elements and or information needed on the screen.

UX and AR Working Together

There is a collection of principles that designers and developers can refer to when designing and developing user interfaces for AR called the Laws of UX. I have chosen a few of them that can be applicable for AR.

With a small screen real estate on mobile devices, designers have to consider how the AR project is going to work easily and intuitively for the user. One has to consider the design of the user interface and how the elements can easily portray instructions to the user without a lot of external interventions. There is a mentality that if the design is poorly done, the quality of work is directly proportional to the quality of usability and content of the product. In addition to this, AR has been interconnected with future technology. It is somewhat expected that users will be ‘awed’ with the AR projections.

‘Productivity soars when a computer and its users interact at a pace (<400ms) that ensures that neither has to wait on the other.’

In this day of technology, users have a shorter attention span and patience. Now that 5G connection is being rolled out, connection speed will be faster as users’ expectations will increase also. It is critical once the project has attracted a user’s attention, the project must be able to deliver information as soon as possible. A possible barrier here would be the ability of the user to interact with the AR, downloading, installing and or opening AR as quick as possible.

‘The time it takes to make a decision increases with the number and complexity of choices.’

We all have seen futuristic interfaces in science fiction movies like Oblivion, Iron Man and Robocop. We all admit that it does look impressive and sleek to see a lot of elements flying around the screen. But take note: your users does not have a high processing brain to accommodate all the information on the screen. Leave the fancy user interfaces to the special effects team in movies. Instead, provide a simple and clean interface for the user to easily digest. The lesser choices the user has to make, the easier it will be for them to get on board and start using your project.

‘The average person can only keep 7 (plus or minus 2) items in their working memory.’

In conjunction with the other laws of UX, Miller’s Law summarises how an interface and or user journey should be kept simple. By freeing the users’ mind from complex tasks and user journeys, this will enable them to achieve and do more with the project. Having a very long on-boarding process for example could discourage any user from continuing forward. Specially with AR, where the time from downloading the app to the time where the user can finally use it is much longer than the time of actually using it.

ARe you ready for the Future? 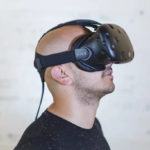 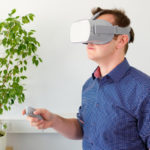