The feature was quietly released in the recent 10.2 build of Oculus Browser, which now comes with a hand-tracking API and timewarp layer support, both of which are considered ‘experimental’ at this time.

The 8.0 version of Oculus Browser released back in February was the first to include initial hand-tracking support for WebXR projects, although it was focused on controller emulation and not true five-finger tracking.

Check out a demo in the familiar WebXR solar system scene featuring the new hand-tracking support:

Hand-tracking came to Oculus Quest as an experimental feature back in late 2019. The intuitive control scheme has since come out of beta and is now available for all Quest owners to use system-wide, letting you control the basic functions of Quest without the need of Touch controllers.

Moreover, there are an increasing number of games and cool experimentations that make use of Quest’s native hand-tracking abilities. We’re hoping to see more soon using the full five-fingered hand-tracking support on Quest.

As for timewarp layer support, just like on non-WebXR-based apps timewarp support allows the headset to reproject past frames when the scene can’t maintain its native refresh rate, which in Quest’s case is 72Hz. 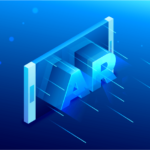 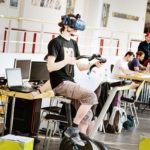