Despite all the magic, VR has its very own challenges

Quite a few meetings, keynotes, and conferences have successfully moved to VR lately, for obvious reasons. Thanks to this recent development,  a broader, less geeky audience have discovered the beautiful “new” world of VR, quickly jumping to the opportunity to litter it with growth hacking meetups and blockchain webinars.

Kidding aside, you can now find whatever boats your float: talking head panels, tech talks, or even yoga and meditation classes. Isolation sounds terrible but in practice, brings out a new wave of creativity in people. It all feels rather exciting, if patchy. Here are some things to consider:

When you move your conference to virtual reality, it drastically reduces the logistical complexity, and it becomes much easier to postpone things. However, it can still be confusing to attendees. The latest case in point was HTC who sent one email announcing the cancellation, followed by another (that in my case, landed in a different inbox) with the new date and time. I can’t imagine showing up at an IRL conference, only to find an apologetic note stuck to a locked door. On the other hand, extending sessions becomes slightly more manageable.

VR isn’t a completely polished tech yet, and it can let you down. The fear is real — what if everything goes wrong? It took my PC 10 minutes to load Women in Immersive Tech, a meeting scheduled in AltspaceVR; prompting me to reboot my Altspace installation a few times. Once I’d finally managed to log in, all the other attendees were busy discussing the fear of everything crashing, slides not loading, internet connection being wonky, and no one being able to hear anything. Anyone planning to organize even a small virtual meetup must perform multiple trial runs to ensure a smooth experience.

Speaking of Altspace, their choice of user avatar is somewhat limited. Unlike Engage, they won’t let you use your photo to create a 3D one. This makes many attendees look too alike, prompting some of them to try and change their avatars on the fly, further confusing everyone. As if that’s not enough, there is also the issue of “possessed” virtual hands that seem to have a mind of their own; that of hovering avatars, or avatars that seem to be half-buried yet still able to move around.

Bring Down The Noise

Background noise is a persistent problem for all VR-based events. Platform developers try to drown it out, and you can improve your conversation by being closer to the other party, but you’re still able to overhear other conversations nearby. Hosts have the option of muting everyone apart from the speaker, but the speaker’s feed may have its own background noises.

VR Is Still Not For Everyone

Another problem some VR developers bring up is how to solve locomotion. Interestingly, women report more substantial motion sickness than men, for which aeronautical scientists failed to find a biologic reason. Be prepared that some attendees may find prolonged sessions unsettling.

VR Is Not Everything (But It’s Still Important)

If you’re a hardware startup, don’t expect your VR demo to seal the deal. You will still have to show what your product can do in real life. But don’t neglect your VR skills and ideas either: god knows how soon a VR demo will become mandatory to run a successful campaign on all major crowdfunding platforms.

Be mindful of your surroundings when wearing a headset. I was completely immersed in listening to a keynote when my dog decided to offer a token tennis ball of friendship, which I immediately tripped over, while still wearing the gear. Another good reason to keep the door closed is not to let your excited squeals annoy your roommate or partner. Divorce rates all over the world are skyrocketing even without our help.

Despite all the magic, VR has its very own challenges 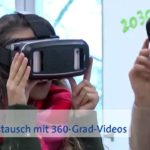