ARCore 1.18 for Android and Unity, including AR Foundation, is rolling out to what Google calls “hundreds of millions of compatible Android devices,” although there’s no clear list of which devices are supported just yet.

To demonstrate, Google created a number of demos to shows off the full set of capabilities the new Depth API brings to ARCore. Keep an eye on the virtual objects as they’re accurately occluded by physical barriers.

“The ARCore Depth API allows developers to use our depth-from-motion algorithms to create a depth map using a single RGB camera,” Izadi says. “The depth map is created by taking multiple images from different angles and comparing them as you move your phone to estimate the distance to every pixel.”

Full-fledged AR headsets typically use multiple depth sensors to create depth maps like this, which Google says was created on device with a single sensors. Here, red indicates areas that closer, while blue is for farther areas:

“One important application for depth is occlusion: the ability for digital objects to accurately appear in front of or behind real world objects,” Izadi explains. “Occlusion helps digital objects feel as if they are actually in your space by blending them with the scene. We will begin making occlusion available in Scene Viewer, the developer tool that powers AR in Search, to an initial set of over 200 million ARCore-enabled Android devices today.”

The new Depth API follows Google’s release of its ‘Environmental HDR’ tool back at Google I/O in May, which brought more realistic lighting to AR objects and scenes, something which aims at enhancing immersion with more realistic reflections, shadows, and lighting.

Update (12:10): In a previous version of this article, it was claimed that Google was releasing Depth API today, however the company is only now putting out a form for developers interested in using the tool. You can sign up here. 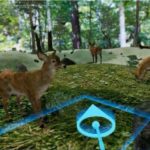 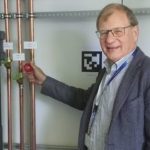