WalkinVR is a custom locomotion driver for SteamVR which offers a range of tools to help gamers with disabilities adapt VR games to their needs. The utility is set to launch for free on Steam next week.

WalkinVR first launched in beta back in 2017. Developer Grzegorz Bednarski says the reception to the utility was positive enough to encourage him to continue building the tool and adding new VR accessibility features to help gamers with disabilities enjoy VR. Next week, on June 29th, WalkinVR 2.0 will launch on Steam for free.

The tool, which supports any SteamVR headset, has four primary features which can be tweaked on the fly.

‘Virtual Move’ allows players to use motion controllers to move themselves around the virtual world without physically moving around their playspace, including the ability to virtual crouch and stand.

‘Motion Range and Boost’ makes it possible to change the origin point of the motion controllers (ie: raise the player’s virtual hands from a resting height up to shoulder height) and to amplify movement so that small physical movements like reaching or twisting a controller become larger virtual movements to aid with interacting with the game and its environment.

‘Hand Tracking’ allows the position of motion controllers to be emulated based on the user’s hand position as tracked by an external motion tracking sensor (like Kinect), benefitting gamers who have trouble gripping a motion controller.

That pairs well with the ‘Xbox Controller Move’ function which allows another person to assist the player in the headset by using a gamepad to emulate VR controller inputs—like using the sticks, triggers, or grip buttons—to help gamers who can’t control the inputs on their own.

WalkinVR is set to launch on Steam on June 29th. While the add-on is free and all features are unlocked, users will have the option to purchase the Premium version of the app to support the developers and remove a brief pop-up inside the headset. 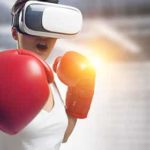