Getting Back To Work: Succeeding With Virtual Reality

Even though the pandemic isn’t over and won’t be for some unknown time to come, people and organizations need to return to work. But that’s not going to mean resuming everything as it was in February. Prudence and the need to minimize unnecessary expenditures for the sake of recovery—if not for compliance with federal, state, and local guidelines—will continue to eliminate travel and large group meetings, and to perpetuate working (and learning) from home.

In the first three months of the COVID-19 lockdown, organizations shifted learning and development (L&D) activity as best they could to a combination of online conferencing and asynchronous eLearning. Those approaches will continue but they need refinement: changes in design and execution. Not everything can be learned or practiced on a conference call.

Virtual reality (VR) is one of the key technologies that can make a big difference in development of actual skills and performance under these circumstances. In mid-May I interviewed Derek Belch, CEO and co-founder of Strivr, about the challenges of re-opening, the role that VR can play, and how to optimize the results.

Bill Brandon: Derek, I’m very interested in what companies need to be doing to prepare for reopening during the pandemic, and in how VR and extended reality in general play into that.

Derek Belch: I think there’s two buckets here. There’s the overall state of the world, HR challenges with reopening, coming back to work, the new normal, all that. And then there’s virtual reality, typically as a potential solution to some of the challenges that companies were already facing before COVID and now, perhaps even more so, after.

So in the former there are a lot of challenges. Companies were already under a lot of pressure to stand out from a hiring perspective, from the, “Why should you work here?” perspective, to dealing with onboarding, the initial training for employees, and ongoing performance. Last fall, the CEO roundtable changed the definition of a corporation from one of maximizing shareholder value and profit to investment in people and communities and etcetera. So it’s not all about profits anymore. A lot of the trends that we’re seeing right now, that COVID has kind of forced companies to take on, were already happening anyway. And I think what’s going to be especially interesting, as we look at HR, learning, etc. , is CFOs are about to see tens of millions of dollars saved at each company from no travel over an 18-month period coming up here that already started in March. They are likely going to ask, “Do we really need to do those in-person trainings going forward? Do we really need to spend 100 hours in training when we could spend 50?” In one company I spoke to, the projected savings on travel alone comes to $50 million. So I think it’s going to be really fascinating to see where this goes and where it’s already gone.

In bucket two, when we think about virtual reality and eventually augmented reality and then XR (extended reality), it was already a tool that was being used for faster time to proficiency for a learning-by- doing experience for trainees. Some of the work we’ve been doing has specifically been around simulation-based assessments to make better hiring decisions. So a multitude of different opportunities exist with VR that probably can be executed on from the home as much as the physical place of work. So super interesting and very excited to see where this goes.

BB: A lot of the companies that I’ve been talking to about this initially simply went to using conferencing software. But I’ve also talked to a few that are doing a different take on blended learning. Some of what they’re doing is with conferencing software and some is with asynchronous applications, which would include VR of course. Any thoughts on that blended approach?

Zoom fatigue is real. We are going to be limited by the number of hours we can put in with some of these remote solutions, but companies are still going to look to do the most impactful things during that time. I think it’s setting up very nicely for an awesome blended online learning solution where employees get lecture, PowerPoint, video, some virtual reality. You can’t role play anymore like we used to. So, how can VR be a solution that allows for that? When you can’t fly to go walk through the plant in Spartanburg right now to see how the cars are made, let’s do it virtually. I think there’s just a lot of interesting things that we’re going to see in the coming months and year,

BB: What are the strategies that organizations new to virtual reality are having to do to pivot from live instruction onsite to use VR?

DB: I think companies are going to be forced to figure out how to train these folks from home, or from locations that are not corporate headquarters. The pole climber for Verizon for example, historically, you would bring that person to their headquarters or a regional facility for a week and you’d have them go through the training and they go out in the field. And you may not be able to do that for the foreseeable future. So how do you do that remotely, how do you simulate that using some of these technologies, VR being a good one? That’s definitely going to be a challenge.

How do you get started? At Strivr we take what we call the end-to-end solution where we literally white-glove and hold the customers hands from start to finish, from the initial strategy of what we’re doing, why, where do I start. Help! We’re literally helping our customers write learning curriculums and build change management plans and figuring out operationally where and how they’re going to pull this off, in addition to making the content as well as software that’s powering all of this, especially at scale.

But it doesn’t happen overnight. It does take a while. When you work with Fortune 1000 companies, they’re big, they’re complex. There’s ramp time for sure. You have companies that are putting blinders up and saying, “All we can do is think about COVID right now.” Okay, we respect that. But don’t forget things are going to open up and you are going to have to resume business. You’re going have to think differently, you’re going to have to bring in new things. What can we do in the background of your coronavirus crisis work that could be ready to go when you’re ready to open up a little bit? I think that’s super important.

BB: Is there anything in particular that an organization can do to reduce that ramp time to implement VR?

Also companies are looking to train their associates on new processes and procedures associated with COVID. Well, there isn’t any off-the-shelf content for that because none of this existed before. And then everyone’s predicting we’re going to have another wave of all this in the fall or in the spring, next year. So let’s start going, let’s prepare now. I think that the work from home thing is a great example: the whole world is mobilized in three-to-five days on stuff that would have taken three-to-five years.

BB: What you’re talking about is the challenge in a very large company. But what about small to medium-sized businesses (SMB)?

DB: There isn’t a massive library that exists yet of off-the-shelf content, there’s no Lynda. There’s no portal site, no Skillsoft for VR content. As it is today, I think it’s probably, with where the state of the industry is, it’s a little too expensive for most SMBs as it relates to the time and money that it takes to pull it off, make the content, the hardware, etc. So unfortunately I don’t think there’s an SMB solution out there today. But certainly, with the world having changed very quickly, we’re investing in it right now in Strivr as well as we know others are. There was already a lot of investment going into this from Oculus and Microsoft and HP and Apple, big companies that are investing in the hardware and some of the software. And now, with the world just turning so quickly, you’re going to see the startups start to invest in it more, Strivr included. So I do think within 12 months or so we’re going to see more opportunities for SMB.

BB: What skill sets should a company have in house, even working with Strivr, to do this successfully?

DB: What you need when you work with us is really two things. You need subject matter experts, as it relates to the specific skill competency you’re trying to train your folks on and you need to get access to those people. And then you need to form what we call a VR governance, an internal cross-functional team that is going to be responsible for shepherding through the organization and feeling this out. So that’s your training and L&D lead or project lead executives, your CHRO, your head of IT, your VP of finance that’s monitoring the ROI, your VP of operations because this is going to be a new thing, entering the workplace environment. We really push our customers to build a cross-functional team that matches our cross-functional teams. In that sense, when you work with us, you don’t really need a bunch of folks with limited skills, but when you work with others that don’t have as much of a support system as we do, or when we are starting to put some of our tools and methodologies into our customers’ hands, you know, to be honest, you don’t want them to do the work themselves. You don’t really need super, super specific skills outside of what they already have. A lot of companies have instructional designers, they have media experts, they have engineers and innovation folks, so this is just teaching new skills and new software tools and new learning principles to a group that’s already been doing it in the 2-D world or the in-person world for years or decades. We can teach anyone how to use the tool. I think the bigger challenge is that the learning methodologies, how we approach it, the change management associated with this, there are already people in those companies and they just have to be open-minded to new things.

BB: What else is there that is important for readers of the article to know about VR and opening back up?

DB: I think the biggest thing that people do want to know is, „How am I going to measure ROI on this? Does this work? What should I expect?“ We are seeing really interesting and exciting results in those areas and it breaks into just two very simple buckets of value.

The first bucket of value is shorter time to proficiency. Time savings and therefore cost savings. For example, 20 minutes in VR in a learning-by-doing simulation on a specific task, skill, core competency etc. We put that side-by-side with the one-hour eLearning module or three hours in a lecture or whatever, and lo and behold, the learning is almost identical at a minimum, or even better when it’s a learning-by-doing experience.

The second bucket of value is real world performance improvement, retention, do my people actually know more, are they performing better at their job? Track training on VR to find out how people do. Lo and behold, it works. We’re seeing operational improvements, efficiency, we’re seeing customer service scores go up, we’re seeing learner confidence increase 97 percent on internal surveys. Most people go from a time perspective and a real world performance perspective. And that’s something that most people grasp, so I think I’d be remiss if I didn’t mention that, as well. 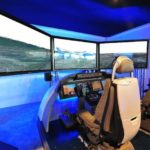