Remote Collaboration And Virtual Conferences, The Future Of Work

Ten weeks ago, Jesse Damiani, writing on Forbes.com, told the story of a college professor who turned his course about XR into a research project about remote collaboration and virtual conferences.

“This semester, Chapman University offered an experimental class called “Landscape of Emerging Media” through Dodge College, Chapman’s school for film and media studies. Taught by Charlie Fink, it was intended to introduce students to the XR industry, including conversations with entrepreneurs, pioneers, and artists. (Disclosure: Fink is also a Forbes Contributor).

Then, the Coronavirus pandemic struck, forcing universities nationwide to reimagine how courses would be taught—namely, to bring course instruction into an online format. But where most of these courses rely on video-conferencing through platforms like Zoom, Fink used the premise of the course to address the needs of the moment.

He and his students reimagined the course as an eight-week research sprint exploring how XR tools will contribute to the future of remote work—and the final product will be a book, tentatively titled, Remote Collaboration & Virtual Conferences: The End of Distance and the Future of Work.”

Chapter 13: Tools for Today and Tomorrow

Zoom, with its one touch simplicity, seemingly infinite scalability, and simple but useful features, has made it the dominant platform today. It meets the people where they are, which is one of the most important qualities a new technology needs to succeed.

Google, Microsoft, and Facebook are coming to get their customers back from Zoom. Earlier this year, a well-publicized Zoom security breach, now repaired, led some corporate customers to take their business elsewhere. Zoom’s competitors are waiting for them to make another mistake. The company will have to keep innovating to maintain their leadership position.

Google Meet has now passed 100 million daily active users and is adding three million new users every day. Both Google Meet and Microsoft Teams (whose features include Skype integration) surpassed 50M downloads in May, 2020. Facebook just launched its group video chat feature, Messenger Rooms, which allows users to create a video chat room and invite up to fifty people to join a video call even if they’re not on Facebook. It’s free, with no time limits. FB reportedly signed up over three million people the first week.

At the same time, dozens of startups are dashing into the market . Fishing where the fish are? The essential features seem hard to execute. Since no one has. Yet.

The predicament of the the remote worker

Discord. Slack. Teams. Asynchronous communication tools that we use every day for work are the simplest forms of daily collaboration. These are ways companies are communicating, but this is not collaboration. It is saving your email in-box, which has become everyone’s to-do list. For collaboration, workers need the same kind of presence and agency they’d have in the conference room IRL.

„It’s one thing to work efficiently on projects we’re already working on. It’s another to brainstorm next ideas,“ Zuckerberg told Dylan Byers of NBC in May, 2020. Not only are we missing the benefits of face to face, we are missing that secret sauce, informal brainstorming while doing other things. We riff off one another. We are stimulated by human contact. Nicholas Bloom, a Stanford economics professor who researches remote work, says creativity, motivation and innovation decline in isolation. But these are generalizations, only sometimes true. My book designer and I don’t have trouble communicating and collaborating via phone and zoom because we’ve done this same thing in the physical world dozens of times.

A lot of companies, like Google, Facebook, and Cisco already have offices across the world, collaborating with matrixed teams every day. Many of these colleagues will never meet in person. Remote collaboration is not new to them. Tools might be. But they’ve learned to make things this way.

More likely than the death of the office is the infrequency of the office, commuting only a couple of days, and using those saved commuting hours to be more productive. But people who don’t get any “face time” with the boss are at a disadvantage. Succession, promotion, and mentorship aren’t established remotely. They are created locally through observation, proximity, and repetition.

Presence alone is not enough.

Presence, that feeling of being in another place that only XR provides, and agency, the ability to control your actions in the simulation, are the two essential qualities of any interaction, whether IRL or XR.

Agency, the freedom to move around and control things as we do in physical reality, is of equal importance. Agency is what keeps us leaning in. It’s what gamers do when they control a character.

The thing everyone wants is not a technology, it’s engagement. The same kind of engagement that you would have in real life, but better, faster,  cheaper *and safer* than it was before.

The efficacy of video based conferences

The conference business was built for a world that no longer exists. It’s a sixty two billion dollar international business that fuels airlines, hotels, car rental companies, and ride sharing services. As economically important as it is, it is also completely optional. It has been teed up for disruption by technology for years but nonetheless has kept growing because its most important qualities are impossible to replicate online. Right now.

Today, conferences in VR are built to be the digital version of their real life counterparts, with “auditoriums,” “tracks,” “breakout rooms,” etc. People tried to use Second Life for business and advertising when it was more famous in the aughts. I think it’s this way at the birth of any new medium. Early films recorded vaudeville performers on a proscenium stage. The films lasted ten minutes because that was the length of the film reel in the camera. It wasn’t until DW Griffith invented the shot that a cinematic language could be developed for the new medium. It was the death of vaudeville. This is what needs to happen with virtual conferences. New things must emerge to replace old ones.

Comedian and musician Reggie Watts has been doing his one man show AltSpace. The act seems completely spontaneous. He bops seamlessly between rapping and live musicalizing. As a digital native, Watts knows the show won’t work if he treats it as a live performance. He knows how to move – or teleport – around the room and how to bring the audience with him. AltSpace has a popular emoji feature that allows you to “applaud,” and applaud we did. It is a joyful and exuberant musical experience in VR that you cannot have in a video or livestream.

Then there’s Fortnite by Epic Games, whose Unreal Game engine provides an infinitely scalable 2D virtual world. The Fortnite platform offers minimal friction, lots of agency, and is graphically rich in an anime kind of way. Fortnite recently hosted several massive non-grame events, including a twelve minute concert by rapper Travis Scott that attracted forty seven million participants. If they had paid ten cents each, that twelve minute show would have generated almost five million dollars. This is the kind of approach to the virtual conference that can accommodate the geekiest tech gathering and the most awesome online Coachella, with mind blowing graphics. These experiences will be designed for immersive media, not video streaming.

Table stakes, defined by Urban Dictionary as “the minimum amount required to play a hand of poker. Also, the minimum amount of effort your lazy ass needs to expand to compete at work, in relationships and basically all facets of life.” Table stakes for video conferences, for example, is screen sharing. Without that, you can’t compete, at least for enterprise business.

Annotation/Draw in air or on objects

A way to take private

A clock, a timer

Most of the sites in the collaboration category are relatively new, so they are at the beginning of their “product roadmap,” and have not nearly completed the full set of features they intend to build into their product. Companies are using Discord, Slack, Teams and other platforms to communicate with public beta testers about features.

Big companies like HTC and HP (ok, VR companies), the big architecture firms, and the large consultancies (McKinsey, Deloitte) appear to be using these XR collaboration  platforms successfully, before and  during the pandemic.

It would seem to us that the collaboration sites focused on verticals, such as software development (Immersed) data visualization (Flow) or AEC (The Wild, Iris) have an advantage that will allow them to move in a faster, more focused way, integrating with specialized BIM tools like Autodesk that their customers use every day.

It is much easier to build a switchblade that does one thing really well than to make a Swiss army knife flexible enough to be useful in every situation.

HTC’s $3.3 M investment in Immersive VR Education, which makes the full embodiment ENGAGE platform, suggests they see this category breaking VR’s way. If so, Zoom, and the others no doubt will be buyers or developers of VR worlds, as herd culling and acquisitions start to take hold next year.

Now that its uses are readily apparent, VR’s use is poised to grow.  The cool kids are now doing it. Soon the rest of us will see people participating in Zoom calls while in XR, which is how I am delivering my AWE keynote on May 26th. XR needs to induce FOMO the way the Internet did in the mid-90s.

Despite the stumbles of Magic Leap and Oculus’ supply chain disruption, spatial computing – XR – will be ubiquitous, at least in the tech industry, in the next few years. It will be in schools, too. And, then, just like the Internet, it will happen all at once. Apple’s rumored “Apple Glass” could be that potential game changer. Even a modest i-Watchish success will advance the industry dramatically. The company has been escalating the hype and hinting at late 2021 or 2022.

Let’s hope Apple Glass lives up to the hype. And let’s hope we’re ready with applications that make the things we do every day, work, conferences, live entertainment, better, cheaper, faster, and safer. 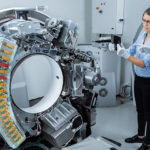 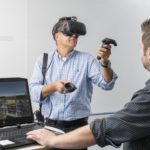