Are Human-Sized Hamster Balls The Future Of VR?

Thanks to the diligent work of a New Zealand based company called Eight360, you may soon be jumping into VR through a device called the NOVA, or as CEO Terry Miller calls it, “the crazy spinning ball of death”.

The NOVA is this massive spherical cage driven by omni wheels located at the base of the giant VR ball. Upon first glance, the NOVA resembles a human-sized gerbil ball, only instead of housing an adorable furry creature, the device instead contains state-of-the-art technology designed to amplify your in-headset experience.

Three large wheels located at the base of the NOVA lets you steer the ball in any direction, while an industrial strength seatbelt keeps you locked tightly and safely in the cockpit as you aggressively turn, hit sharp banks, nose dive, or whatever movement the experience might be.

You have full unlimited motion.

As the location-based VR market continues to grow the NOVA could easily become the next big attraction at VR arcades; especially when it comes to virtual racing and flying games. As a matter of fact, the NOVA already works with off-the-shelf games like iRacing, Project Cars, and X-Plane!

The 360 device offers a whole new level of immersion that goes beyond simple controller haptics. “It’s just responding to the physics in the content,” said Miller during an interview with New Atlas.

Not only do you have full visual and audio immersion via the VR headset, but physical immersion as well. Thanks to some clever haptics built into the ball and the fact that the device can simulate any angle, Eight360 claims the NOVA is able to deliver a genuine of acceleration and movement, whether it be hitting a 31 degree bank at Daytona International Speedway or clocking 160mph while racing through the cosmos.

Miller broke down how they were able to achieve these effects. So, say for example you’re on the runway preparing for takeoff in a fighter jet. As soon as you hit the throttle to accelerate for takeoff, the NOVA will physically roll you back in your seat; your visuals, however, stay exactly the same. This delivers a sense of acceleration by making it feel as though you’re being pushed back in your seat by the force of the jets.

Developing the NOVA required a big team. Miller brought together a group of engineers from all over the globe, including former employees at both Lockheed Martin and Tekron. Together they worked on the design of the device and focused on how to deliver a realistic experience via a controller players could literally sit inside of. In the end, the gerbil ball approach offered the best design.

The NOVA is huge. Really huge. It’s 6.5 feet on all sides and weighs about 1,100 pounds, but since the ball just sits on top of the base, it’s actually not too difficult to transport or assemble. The base is powered by a standard three-prong outlet while the ball houses the computer that controls everything.

The cockpit is also customizable; you can swap out the seating to recreate everything from the drivers seat of a stock car or the cockpit of a fighter jet. The controls can also change, as Miller explains, “so when you change vehicles, they feel very different. Like a racing car might feel very hard and stable and touchy, but then you load up a jeep, it starts feeling like a great lumbering, rolling thing.”

There’s a lot more you can do with the NOVA than VR gaming, however. Eight360 is currently exploring possibilities that include military mining and forestry industries, as well as workforce training.

The company is looking to lease their giant VR controller for $150,000 a year; this will include full technical support, upgrades, and maintenance. 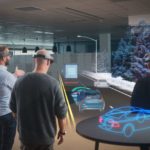 Unlocking The Potential Of Enterprise XR