Does virtual reality have the power to change abusers?

Getting Emotional – Some of us have less empathy than others, but VR could help change that.

Understanding the ‚other‘ is a constant challenge in society, especially when we’re cut off from one-on-one interactions. One of the tried and true methods of reducing homophobia, for example, is meeting gay people. How can those feelings be rekindled when we’re quarantined? A virtual reality experiment designed to induce empathy-like thinking in users is having powerful effects, according to new research.

A group of psychologists and neuroscientists have discovered how feelings of embodiment experienced in VR can positively affect feelings of connection to a virtual character.

The researchers say that this approach offers a plausible path for rehabilitating violent offenders who may exhibit lower levels of empathy.

Lead author and cognitive neuroscientist, Aline de Borst tells Inverse that choosing to use an immersive environment like VR instead of static images like a photograph allowed researchers to increase a users feeling of „presence“ in the environment and in turn their ability to see things from a new perspective.

The study, published Monday in the journal eNeuro, looked at how twenty college-age participants — half female and half male — responded to simulated domestic abuse after exploring either first-person or third-person virtual environments. In the first-person environments, the participants were asked to complete a set of physical motions (e.g. moving their head) while facing a mirror. In the mirror, they saw a reflection of a woman doing the same movements. Oppositely, participants in the third-person environments were asked to complete these same movements but instead of watching the woman mimic them in a mirror, they observed her do so from down a hall. 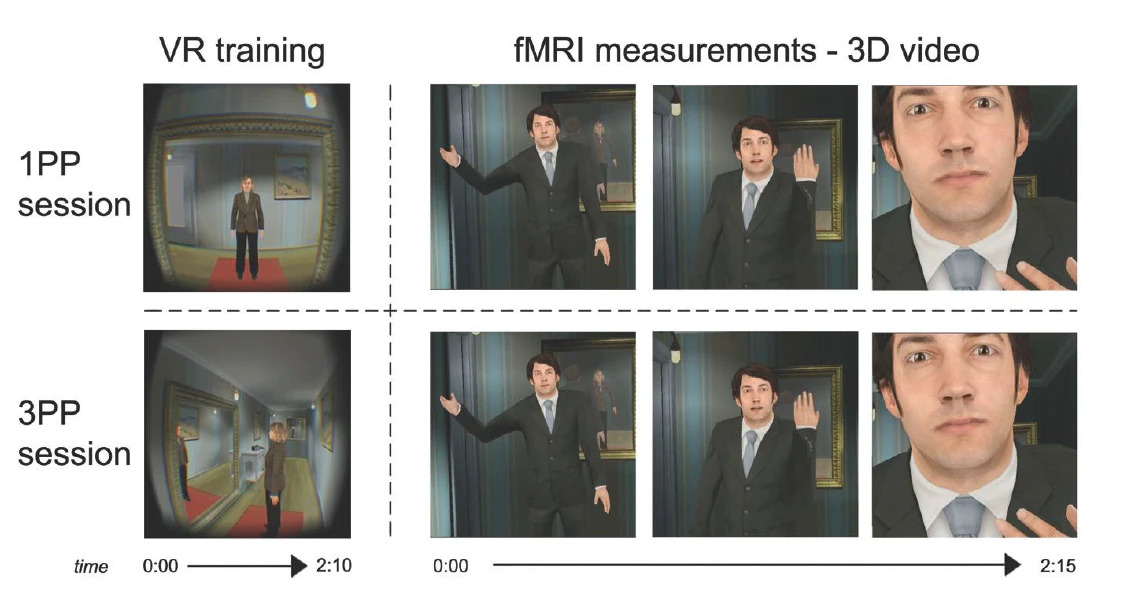 Researchers designed a virtual environment and accompanying 3D video to test how first-person VR would increase a user’s feeling of embodiment in the verbal abuse scenario.eNeuro

„Identification and body ownership increased when the participants were embodied in the virtual female body.“

The researchers found that participants who had previously been in the first-person environment were more likely to identify with the woman in the scenario and generate neural activity as if they themselves were being threatened.

„Our results showed that identification and body ownership with the female victim was higher in the first person perspective session,“ says de Borst. „So we see that identification and body ownership increased when the participants were embodied in the virtual female body, compared to when they were not… This means that participants did not only feel more identified with the victim, but their brains also perceived the scenario as if the events were occurring close to their own body.“

However, de Borst says that these feelings are different from true empathy. Questions aimed at assessing empathy might ask „how do you think the woman might feel,“ but because this study focused on body ownership and identification instead, the researchers asked questions like „did you feel identified with the woman“ and „did you feel as if you were in the female body and lived the situation as if you were the woman.“

De Borst tells Inverse that while this study itself does not offer an approach for how this technique can be used as a therapeutic behavioral tool, similar research on the topic has demonstrated that such an approach may have long-term effects on someone’s sense of embodiment.

„Using the same VR scenario and a similar training [my co-authors] demonstrated [in a separate study] that embodiment in the female victim [by domestic violent offenders] increased their ability to recognize fearful female faces and reduced their bias towards recognizing fearful faces as happy,“ says de Borst. „Thus, they were able to modify socio-perceptual processes, such as emotion recognition, that are thought to underlie this specific form of aggressive behavior.“

De Borst says that similar behavioral studies, for example on a fear of flying, have shown behavioral changes lasting as long as three years. And this study is not the first of its kind: a 2018 study featuring scientists from the United States, Spain, and the U.K offered male domestic violence offenders a virtual scene of abuse in first-person perspective. Similar to de Borst’s results, the 2018 study found that „being embodied in a female victim, offenders improved their ability to recognize fearful female faces and reduced their bias towards recognizing fearful faces as happy.“

As research in these kinds of immersive and personalized treatments continues to progress, de Borst tells Inverse that it could greatly impact both fundamental science as well as patients with affective spectrum disorders.

Abstract: Social aggression, such as domestic violence, has been associated with a reduced ability to take on others’ perspectives. In this naturalistic imaging study, we investigated whether training human participants to take on a first person embodied perspective during the experience of domestic violence enhances the identification with the victim and elicits brain activity associated with the monitoring of the body and surrounding space and the experience of threat. We combined fMRI measurements with preceding virtual reality exposure from either first or third person perspective to manipulate whether domestic abuse was perceived as directed to oneself or another. We found that first person perspective exposure increased body ownership and identification with the virtual victim. Furthermore, when the stimulus was perceived as directed towards oneself, the brain network that encodes the bodily self and its surrounding space was more strongly synchronized across participants and connectivity increased from premotor and intraparietal cortex towards superior parietal lobe. Additionally, when the stimulus came near the body, brain activity in the amygdala strongly synchronized across participants. Exposure to third person perspective reduced synchronization of brain activity in the personal space network, increased modulation of visual areas and strengthened functional connectivity between premotor cortex, supramarginal gyrus and primary visual cortex. In conclusion, our results suggest that first person perspective embodiment training enhances experience from the viewpoint of the virtual victim, which is accompanied by synchronization in the fronto-parietal network to predict actions towards the body and in the amygdala to signal the proximity of the stimulus. 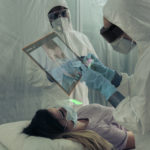 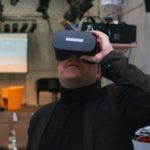