What’s it Really Like to Host a Live Event in VR?

VR/AR Chicago hosts a monthly event that normally takes place at 1871, Chicago’s tech incubator. On an average month we draw between 75-150 attendees, with the fluctuation generally related to industry topic, weather, and timing related to other events. The stage portion of the event is live-streamed to the VR/AR Chicago Facebook page, where it is also archived. I’ve been the primary coordinator of the event since its founding in 2017, but for the last couple years a lot of help has come from the VRARA Chicago Chapter leadership – handling speaker sourcing and coordination, social media marketing, graphic design, sponsorship generation, and on-site registration and check in.

The purpose of VR/AR Chicago is to help our audience members take their next step forward with immersive technology. We provide technology demonstrations, networking, industry expert panels and live Q&A. This is done specifically so that members of our audience can obtain whatever it is they need to move forward with their use of augmented reality and virtual reality, whether that be an industry connection, information, inspiration, direct experience, or anything else. It is a free event that is open to the public, and generally takes place on the first Wednesday of each month.

1. Structure of the Event

In order to understand what makes the event successful, the structure needs to be addressed. There are four main components that make the VR/AR Chicago event series valuable. These are networking, demonstration, presentation, and live Q&A. Knowing that it was impossible to provide live, in person technology demonstrations – though attending the event itself was in one way a live demonstration of VR technology – that left the other three components. We had to be present in an environment that allowed for open networking between the attendees prior to and after the main stage event. This factor eliminated the possibility of simply hosting a webinar. At the same time, we did want to provide a valuable stage presentation with produced content, and facilitate a live question and answer format discussion. In other words, crowd control and presentation ability were vital. The one other factor that makes VR/AR Chicago successful is its regularity. We don’t cancel, and we don’t reschedule. The shelter in place order hit Illinois on March 20, just 12 days prior to our April 1 event. We immediately started planning to take the event virtual.

Like any event, the first step was choosing a venue. We evaluated several options very quickly on a number of important criteria. The systems we looked at included VRChat, RecRoom, SecondLife, AltSpace, and Mozilla Hubs. The main evaluation criteria were:

— Capacity (knowing we were going to draw an audience of at least 75)
— Moderation (to present in the space, we had to be able to mute the crowd)
— Presentation (had to be able to run a slide deck with embedded video)
— Reliability (the tools in the environment had to work without exception)
— Accessibility (not everyone has VR, we need to be accessible to non-VR users)
— Streaming (we’ve streamed our events for months and we’re not stopping now)

In the end, only AltSpace met all of the necessary criteria. We were concerned about the inability of people with Apple devices to access the AltSpace environment directly, but a choice had to be made and ultimately the other factors were more important. Additionally, it was very easy to get in touch with AltSpace staff for support, which was a welcome surprise.

Once the venue was chosen, the next tasks included evaluating all the capabilities of the space and preparing the content. We quickly learned how to control our live presentation using slides.com, which allowed us to embed YouTube videos. Jason from AltSpace event staff helped us mirror the room, and spent over an hour walking the VR/AR Chicago team through the event moderation tools, as well as tips for troubleshooting issues during the event. Finally, we tested the ability to place a virtual camera operator in the space to stream the event to our Facebook page, with a minimal 10-second delay, where we monitored the chat during the event so that Apple users had a way to participate in the live discussion.

3. Be Ready to Handle Technical Difficulties

Anybody that’s spent any amount of time working in live events knows that you need to appease the “live demo gods” with an ample sacrifice of your time prior to the actual event, or you will incur their wrath. We tested slides, videos, muting and un-muting microphones, resetting the room, playing videos, and broadcasting the live stream several times in the actual AltSpace environment during the days leading up to the event. We practiced it so many times that troubleshooting issues became a matter of muscle memory. During the actual event, at the first video roll, the audio didn’t play. It took just under 2 minutes to diagnose the issue, reset the room, and then reset the live stream operator in the room so that the event could continue for both the attendees in VR and the people watching the live stream. Three days prior to the event we concluded that one of our scheduled presenters was unable to access AltSpace. As a result, we scheduled time for Devon Rutkowski of Gilbane to record her presentation using Zoom before the event, and embedded that video into the event slide presentation. During the event, some people – particularly those watching the live stream – had trouble hearing Meg Miller of Gensler because her headset microphone wasn’t picking up the audio well. We boosted her volume as high as it would go.

In the end, the event worked as well as could have been expected for an audience of around 60 people in VR and an additional 25 watching the live stream.

4. Prepare the Audience for the New Medium

We knew that over half our audience was not going to have experience with AltSpace – so in addition to marketing the event, we had to provide detailed instructions about how to access the event. VR/AR Chicago coordinator Tom Packard not only provided detailed instructions, with pictures, about creating an account on AltSpace and setting up an avatar. He crafted messaging and suggested that we send notice to everyone that registered for the event urging them to set up the software necessary to attend in advance, as it took around 30 minutes to create an account and complete the on-boarding process. He also spent 2 full days in AltSpace in a similar environment to the presentation environment, greeting people who read the instructions and wanted to take AltSpace for a test run. We met with Meg Miller a day prior to the event in the practice room, so she could get used to the controls and practice presenting. Ultimately we treated the event like a normal live event in a physical venue. Even the AltSpace events team members who stopped by the space to assist us commented on how our level of preparation exceeded anything they had seen before.

During the last hour prior to the start of our event, one final thought occurred to me. Hosting an event in VR is something a lot of people and companies are going to be trying right now. Many of them won’t have the same level of experience with live event production and VR technology as I do. With 30 minutes to go prior to the start of the event, I set up two cameras and three screen captures to record how I produced and managed the event in real-time. This was recorded using OBS and later streamed to Twitch and posted on the VRARA Chicago Chapter’s YouTube page. It is also included below.

I do need to again thank our presenters, our sponsors, 1871, VRARA and BUNDLAR, the AltSpace Team, and my team at the VRARA Chicago Chapter and VR/AR Chicago. 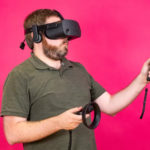 How enterprise VR can empower a remote working world 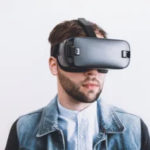