Holographic collaboration: The next big idea in remote work?

Spatial is trying to turn avatars into serious work tools, and investors are backing the effort.

For every mega-hit like Slack in the world of workplace collaboration solutions, there’s a long trail of tech that just never seems to catch on. Take, for example, telepresence robots.

So, it’s with some necessary caution that we approach virtual reality collaboration, which, as a category, somehow seems almost preordained to fall short of the hype. And yet Spatial, a company that’s seeking to eliminate the need for video conferencing and work travel with a VR workplace populated by lifelike avatars, makes a compelling case for itself.

Following a successful Series A that brings total funding to $22 million, Spatial is now one of the better-funded mixed reality startups out there and a rising player in an AR/VR landscape.

Spatial’s big selling point is that it’s device agnostic. The founders started with the premise that working remotely is increasingly popular, but staring at their faces on videoconference calls while sharing screens is clunky at best. Real-time feedback, real-world collaboration, and the ability to draw, build, and tweak in 3D space is lost.

Holographic collaboration is a promising solution as the world makes the move to remote work. Slipping on a VR headset, the most compelling version of the idea puts you seamlessly into a shared setting with colleagues from around the globe who can interact, share ideas, present, and collaborate. It’s an attractive enough proposition that many large companies are willing to test the concept.

„Last year we saw a strong demand to collaborate in AR/VR from more than 25% of the Fortune 1,000, and we announced our first wave of customers such as Mattel, Purina/Nestle and BNP Paribas,“ says Spatial Co-Founder and CEO Anand Agarawala.

To make the virtual workplace feel less like a video game and more like a business setting, Spatial has focused on creating realistic 3D avatars from 2D photos users upload. Spatial’s virtual world is also kitted out with collaboration tools and capabilities aimed at helping workers do everything from design products to model campaigns.

Still, adoption will make or break the technology, and enterprise adoption of VR has been bumpy and unpredictable. Wisely, Spatial built its platform to be device agnostic. It works on Microsoft HoloLens, Oculus, Magic Leap, Qualcomm XR2, Android/iPhone mobile devices, or a plain old desktop computer, eliminating the need for a company to make a capital investment in pricey hardware just to trial the technology.

Is that enough to drive adoption? Tough to say. One reason Slack has been so successful is that it builds on deeply engrained social media behavior and integrates unobtrusively into existing workflows. Broader adoption of VR in the enterprise will certainly help holographic collaboration companies like Spatial take root, but that adoption hasn’t yet happened at the pace many thought it would.

„Spatial’s mixed-reality solution will be a key part of the future of work,“ says Krieger. „They’re taking us beyond everyday tools like Zoom and Slack and pointing the way towards what conferencing & collaboration can be like if they were invented today and I’m excited to support the journey.“ 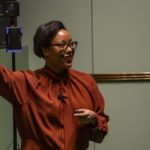 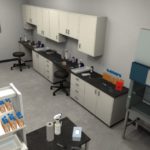