„Learning is experience, everything else is just information.“

This quote, attributed to Albert Einstein, could be immersive learning’s motto. Indeed, Immersive Learning is much more than a cost-saving strategy for organisations looking to scale soft skills training. It’s even more than the „Empathy Machine“ described by Chris Milk in his 2015 TEDTalk. Immersive Learning, and more specifically embodied VR experiences (EVR), have the power to profoundly, often subconsciously, impact behavior for the long-term.

We are, collectively, in the business of creating a way to travel through human experiences, of building a ‚Machine To Be Another‘. We want to empower people to learn from those experiences and from their own behavior to become better versions of themselves in the real-world, faster and without hurting anyone in the process.

This is not some kind of a tech-utopian evangelist rumble. Everything we do is, and needs, to be deeply rooted in research. Here are short overviews and links to 3 of the most influential research papers around the behavioral impact of EVR.

In this study, Mel Slater and his team allow convicted offenders to step in the body of a victim of domestic abuse. Compared to a control group, participants in the VR experience improved their ability to recognize fearful female faces. Early evidence suggests a decrease in recidivism although it is to early to conclude that there is an absolute correlation.

Implicit racial bias plays can play a crucial and dangerous role in a legal system that relies on a jury’s judgment. In this study, Natalie Salmanowitz puts different groups of participants in either Caucasian or Black bodies then asks them to evaluate a mock crime scenario. Not only did the people who embodied a black avatar produced significantly lower implicit racial bias but they were also more conservative when evaluating guilt, rating vague evidence as less indicative of guilt and rendering more ‚Not Guilty‘ verdicts.

This study, ran by a team at Stanford University, looks at measuring the long-term behavioral impact of taking one’s perspective in VR vs the traditional or desktop computer-based methods. In this case, the perspective taken was one of someone becoming homeless. The results show that a significantly higher number of participants in the VR condition signed a petition supporting affordable housing for the homeless, despite very little differences between the groups when it came to self-reported measures of empathy. This is a striking example of sustained behavioral change on a subconscious level.

This is a very short yet powerful selection. For those willing to dig deeper, I have compiled more papers and articles here. Feel free to share more in the comments. 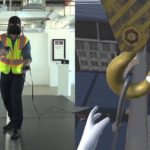 How to Measure Training Effectiveness of Virtual Reality 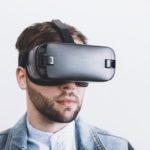