Can VR revolutionise health and safety training by allowing workers to deal with potentially life-threatening scenarios without being put in any danger – or is there a risk that being viewed as a “game” will diminish its impact? Dr Tess Roper of the University of Nottingham discusses a study in partnership with the Institution of Occupational Safety & Health that explores these issues

Virtual Reality (VR) has boomed and busted a few times since its inception. Despite not taking off commercially for several decades, outside of the entertainment world VR continued to be developed for specific serious applications such as flight, military and medical training; areas in which the ability to learn and practise safely before entering a real situation is critical.

In recent years, VR has boomed again but this time with sufficient quality for its hardware cost that it has penetrated the entertainment industry. The result is that we can exploit the rapid developments from the commercial sector for those safety-critical applications with readily available, consumer-priced hardware.

Businesses can now look to VR as a viable tool not only for training professionals in highly specific skills but also for broader application across the whole workforce. There are numerous excellent examples of VR being used for similar purposes, but a potential drawback keeps rightly being raised: isn’t this just a game? Previous research had shown that this might be a cause for concern.

Use of VR in health and safety applications

The Institution of Occupational Safety & Health (IOSH) sponsored us to explore the use of VR in health and safety applications through their research fund, in cooperation with industry partners who provided input into how occupational safety and health training is handled in their respective organisations.

There are two facets to this research. First, we need to understand whether employees will treat VR like a game. If so, whatever we show them or teach them in VR might not necessarily translate to real life. In the worst case, it could even reduce safety attitudes and behaviours, if the light-hearted risk-taking mentality of a game becomes associated with safety-critical scenarios.

The second facet: irrespective of how employees respond to it, is it actually effective? Is it any better than cheaper, easier or existing alternatives, or is it novelty for novelty’s sake?

How do people behave in a Virtual Environment?

With regards to the first, we investigated how people behave in a Virtual Environment (VE) when faced with an emergency situation (fire breaking out in an office building). We compared the way participants behaved in the VE with the way we know that people really behave in similar real-life situations based on incident reports and other sources. We told participants to imagine they were attending the virtual offices to undertake some tests for a new job, and gave them a series of tasks, which was unexpectedly interrupted partway through by an alarm and an accumulation of smoke coming from two small fires nearby.

We found that in many ways people responded in the VE the same way as they would in the real world. For example, most people tried to exit the building the same way they came in, even though it wasn’t the shortest or safest route out of the building. Several people also tried to enter the elevators, despite clear signage instructing “do not use in event of fire”. We know that people in the real world have these same tendencies. This means that VR could be a really useful indicator of how people will behave in a given environment and a given emergency scenario, which could help organisations to design safety interventions effectively, could be used in decisions on building design and emergency procedures, and could also identify what safety training is most important for their own employees.

However, we did find some instances where behaviour deviated from what we’d expect in real life. For example, in real life people tend to delay evacuation while they continue a task, save their work or collect their belongings; in the VE, there was not the same motivation for people to do this – and very few people did so.

Importantly, we did also find evidence that in some cases people treated it as a game. There were actions like walking through the middle of a smoke-filled room, and comments like “I didn’t feel like I was in danger, I felt like the avatar was in danger, but there was no real urgency, so that was one of the reasons I felt I could run through it” and “oh there’s a fire, what happens if I walk in, I will just test it and see, but I wouldn’t do that in a real fire”.

Interestingly, when we did the same experiment but added in a simulation of heat through three 2KW heaters, and the smell of smoke through a fragrance diffuser, these game-like actions and comments were much reduced. People responded more directly, moved more quickly, were hesitant around hazards and reported more emotional responses (fear, anxiety, stress or panic).

In a post-task questionnaire, participants who had experienced this multisensory version reported significantly higher levels of time pressure, and rated that they felt “the building is on fire” significantly more, than participants who only had vision and sound. Across all of our quantitative and qualitative analyses, we concluded that participants experiencing the multisensory version of the VR were treating it less like a simulation, and exhibiting more valid behaviours.

As to the second objective of our project, we conducted a further study to explore the differences between VE- and PowerPoint-based training. We tested two different training scenarios: one teaching fire safety and one looking at safety procedures in an engine disassembly task with the potential hazard of a fuel leak. We gave people a knowledge test before and after training to see how much they learned, and tested them again a week later to see whether they retained the knowledge.

Interestingly, we found that people taught through PowerPoint performed better in the post-task test, but that their retention was worse; average test scores one week later had slipped below those of participants trained with VE. Our explanation for this is that we were teaching in an experiential way with the VE, but still testing in a traditional way – with questions and answers. People might be able to verbally repeat back what they’ve just learned through a presentation but that doesn’t necessarily mean the knowledge will stick. It also seems probable that learning in VR would be better translated into application in the real world. We weren’t able to put people into a potentially dangerous situation to test this for ethical reasons, but it’s worth looking at alternative ways of testing the transferability of what has been learned.

But perhaps the most convincing argument for VE-based training lay in improving mentalities: people trained through VE reported higher levels of engagement, a better attitude to health and safety generally and were more motivated to undertake further health and safety training in future. Given the known challenges of getting employees to care about and engage with occupational health and safety, these are really important differences.

An important aspect of this research is that we weren’t using expensive bespoke laboratory equipment when we conducted our studies. We were using consumer-level technology (an HTC Vive) VR headset, an Alienware gaming laptop, and some low cost heaters and scent diffuser that can be purchased at a low cost online). This is the kind of technology that would be affordable for smaller companies, making it a potentially viable training solution for their workforce. A complete system, including the laptop, cost less than £3,000 to produce.

The pace of technology change means that we need to frequently revisit the possibilities offered by VR and evaluate them properly. It’s an exciting technology, affording potentially revolutionary uses, but we need to be careful not to misapply it – especially when dealing with such serious applications.

A full report on the research, along with a summary report of the implications, is available at https://www.iosh.com/multisensoryVE. 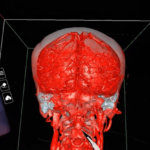 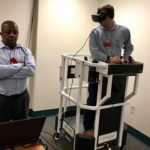 When to choose VR to train heavy equipment operators