Immersive technology transports you into an experience. Research shows that powerful stories in these environments are stored by our brain as memories — with the full emotion that memories capture. These experience can be a gateway to increased empathy, compassion and behaviour change in a way that other media can’t replicate

Immersive technology is being used in advanced training where a real-world learning environment is hard to replicate such as firefighting, disaster response, or training surgeons.

Simulated reality are digitally simulated spaces that people can shape and direct as they see fit. It can be used for participatory design in communities.

Walking through a refugee camp with Sidra

The UN included Immersive technology as part of the Sustainable Development Goals Action Campaign. Several immersive films introduced global leaders and funders to the reality of the issues. One film gave the experience of Za’atari Refugee Camp through the eyes of a young girl by the name of Sidra. The impact of screening these films world-wide has been to raise double the expected funds for the SDGs.

Designing our city space together

During NESTA FutureFest, Gabriella Gómez-Mont, Founder and Director, Laboratorio para la Ciudad, from Mexico City, explained how they pioneered with UN-Habitat the use of Minecraft to Crowdsourcing Public Space Ideas in Mexico.

The Lab hosted an open competition where each participant was given a “plot” that represented Plaza Tlaxcoaque, a square in the historic centre of Mexico City, in Minecraft. They had three hours to complete the challenge. 7,429 young people took part, 1,438 ideas were submitted, and 431 projects were completed.

This pilot became the Block by Block Foundation. Partners include UN-Habitat, Microsoft and Mojang, the Minecraft creators. It’s a charity committed to supporting participatory design in public spaces, particularly in disadvantaged communities as a precondition for poverty reduction and the fulfilment of human rights in urban areas.

In New York at a women in tech event the Google Daydream immersive team explained how using this tech has never been easier. A 360-degree camera can be rented in most cities and the video can be hosted on YouTube or on an iPhone app. Films can be viewed on your phone with basic VR headsets made of cardboard.

However, creating experiences with an emotional impact is a creative film making specialty. The practice of making immersive films is early in its evolution but it would be similar to commissioning any film. The quality of the product is completely dependent on highly honed skills of visual, and now experiential, storytellers.

“This whole desire to move into immersive is a generational shift. A new generation is demanding participation in their media — which you can call interactivity.” — James George, co-founder of Scatter

The potential for using this medium to advance our society and environment is large not yet realised. HT, one of the leading virtual reality hardware and software providers has a $10 million fund to support the creation of VR experiences that will contribute to the UN SDGs.

This is a series of articles to introduce social enterprises, NGOs and philanthropy to the potential of tech for good. This travel Fellowship was supported by the Winston Churchill Memorial Trust New Zealand and Foundation North. 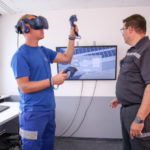 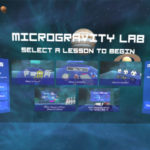 Middle School Students Can Now Learn About Microgravity Through VR