Hands-on: Logitech is Building the SteamVR Stylus That Needs to Exist

Logitech today revealed the VR Ink ‘Pilot Edition’, a stylus built for art and design in VR. Built with SteamVR Tracking tech, the stylus works similarly to a typical SteamVR controller, but affords the natural precision that comes with precise finger control. While it works well for drawing in the air, a pressure-sensitive tip also makes it great for drawing (and potentially evening writing) against a physical surface.

Aimed toward enterprises using VR for digital design workflows, Logitech says that it plans to bring the VR Ink stylus to market in the near future. For the company, today’s announcement of the ‘Pilot Edition’ is about getting the word out and soliciting interest from companies who want to use or integrate apps with the VR Ink stylus.

I got a hands-on demo of the VR Ink Pilot Edition and came away suitably impressed with what Logitech has put together, both in performance and functionality.

Though it’s ‘just’ a stylus, the VR Ink has a surprising number of controls built right in. On the sides where you grip the stylus are two grip pads which can be squeezed as a form of input. On the top where your index finger rests is a pressure sensitive button at the front, an oval-shaped trackpad/button in the middle, and a smaller menu button in the back. There’s also on-board haptics, and the end of the stylus has a pressure-sensitive tip which allows for pressure-sensitive writing against physical surfaces.

It’s definitely bigger than a regular pen or pencil, but actually impressively compact when you consider all of the electronics that need to fit inside, and easy enough to grip just as you would a real writing implement.

The whole stylus uses SteamVR Tracking tech (supporting 1.0 and 2.0 base stations), and it can be easily used to draw lines in the air in art and design apps. For that purpose, it does feel more natural to use the pointy end of a stylus for tracing lines than using a big controller which restricts finer motions to wrist control, whereas a stylus benefits from fine finger control. Many readers on this site will be familiar with painting or drawing in 3D using VR, but the more exciting part of VR Ink is its ability to also draw precisely against a flat surface.

The stylus is a tool that’s been around for a millennia, and for good reason—the ‘free’ feedback of actually pushing a writing implement against a surface works perfectly in conjunction with the fine motor control that our fingers are capable of.

To make a stylus really work for surface drawing in VR, you need a lot of precision, and so far the VR Ink has impressed on that front. Largely driven by SteamVR Tracking, but undoubtedly assisted by the stylus’ pressure-sensitive tip, drawing against a table feels really natural. I’m by no means a digital artist who spends every day with a Wacom tablet, but I’ve used my fair share of tablet PCs with active digitizers (including the Surface Book as my primary laptop), and VR Ink’s drawing and pressure sensitivity felt very comparable.

I would go so far to say that the precision ought to be enough to comfortably allow for regular sized handwriting, but the apps that Logitech were showing off unfortunately weren’t tuned for this purpose. I did try anyway of course, and it worked reasonably well, but didn’t look quite right, and it was clear to me that the app (and its interpretation of the pressure input) was trying to infer drawing strokes rather than the small, quick, and sharp strokes that make up written characters. From my time with the stylus, it feels like an app designed with handwriting in mind could really work well.

Granted, there was some occasional stuttering of the stylus, though for the most part it seemed occlusion related, which could be fixed with better base station placement. The demo room was using four 2.0 base stations mounted above head height (which is typically what you want), but mounting them just above table height might actually allow for better view of the stylus, especially when the user is leaning over the stylus as they draw or write.

If Logitech’s VR Ink can indeed deliver the precision needed for ‘real’ handwriting in VR, it could be the solution to one of VR’s fundamental problems: text input. Though drawing and designing in VR is undoubtedly useful and even fun, a huge portion (majority?) of productivity work requires text input.

But that’s so far an unsolved problem in VR. There have been attempts with voice input, virtual keyboards, and even real tracked keyboards (something Logitech itself explored), but none have proven to be effective solutions, typically due to slow input speeds (or a lack of sufficient hand tracking). A VR stylus that’s good enough for handwriting could be the key.

For Logitech’s part, they aren’t yet pushing hard on handwriting input specifically—they’re pitching the VR Ink stylus as a more intuitive and precise tool for drawing in VR, either in 3D or against a flat surface (and they aren’t wrong). If they succeed in getting VR Ink adopted in the enterprise VR space, hopefully a focus on handwriting in VR as text input will the next logical step for the device.

Beyond Logitech, the VR Ink stylus is also a win for Valve, as it shows not only how versatile their SteamVR Tracking tech can be, but also how their commitment to an open VR platform is enabling for others. VR Ink couldn’t work with Oculus headsets because the company doesn’t allow third-parties to make use of its tracking systems.

Logitech is only just revealing the VR Ink Pilot Edition, though they say this isn’t a prototype and that it’s absolutely coming to market. Exactly when and at what price point, though isn’t clear.

The company is of course using this opportunity to connect with more partners who are interested in using or integrating with the VR Ink stylus, though they’re already touting initial integrations with Tilt Brush and Vector Suite, and committing to an SDK for both Unity and Unreal Engine. 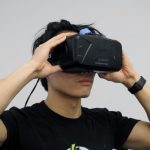 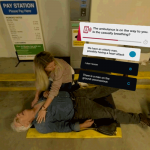