The groundbreaking work was shown during F8 2019. There was a lot to take in from this week’s Facebook Developers Conference (F8) 2019, not just the official rollout of pre-orders and launch dates for Oculus Quest and Oculus Rift S. The company showcased some of the work it was doing across a range of challenges it was trying to tackle, one of them being social interaction in virtual reality (VR). During the second day’s keynote, Facebook unveiled its latest Oculus Avatars prototype which aims to bring someones entire body into VR.

The work is being done by Facebook Reality Labs (FRL) with the goal to be able to fully represent a user from head to toe in VR, making social interactions even more seamless and natural.

FRL’s Ronald Mallet began by discussing a project the team revealed a couple of months ago, Codec Avatars, which was about making avatars as photorealistic as possible. While certainly a massive leap from the current avatars available today, a massive amount of equipment was required to scan a user’s features, plus it only worked from the shoulders up.

Mallet noted that while plenty of information can be glean from someones facial expressions, the same can work for the entire body; where full motion can tell you about emotion, agreement, trust and empathy. The needed to create a body model that represented the human anatomy but which needed to be fully adaptive to match any individual automatically.

To build the model FRL started from the inside out, designing an anatomically correct skeleton with proper articulations, from the way the shoulders roll to joint movement. Then they matched the skeleton to a users body structure, which accurately followed the team members movements, all from a single sensor – Mallet didn’t specify which sensor if it was a normal Oculus one.

Of course, we can’t all be skeletons in VR so muscles were added to the model, helping to predict how they move and contract. Finally, skin and clothes were added as faithfully as possible with a physics-based model for cloth deformations, with the final prototype seen in the above image.

There’s still a way to go before this tech will be consumer ready, it does look very promising. For now, Oculus Rift users will have to be happy with the Expressive Avatars update. As further details are released, VRFocus will let you know. 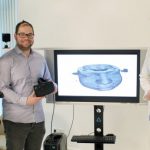 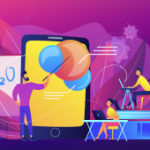