10 THEMES FOR AUGMENTED AND VIRTUAL REALITY IN 2019

The first pair of AR glasses to gain widespread consumer acceptance will have to be lightweight, trendy and robust. The glasses will need a wide field of view (FOV), full-color display, all-day battery life, low price point, and extensive app ecosystem. The first VR headset to be a mainstream hit will, of course, have to be fully standalone and deliver premium content with amazing and natural performance. While it’s unlikely either of those devices arrive this year, AR and VR will continue to improve over 2019 due to experiments in light-field and waveguide tech, advancements in Computer Vision (CV), and developments in sensory tech like spatial audio, haptics, gesture recognition, eye tracking, and even smell in VR. We’re already seeing slimmer and lighter devices, improved resolution and FOV, and more realistic-looking and feeling immersive environments.

Platforms and Tools for Creators

Lack of content is a major hurdle to the mainstream success of both Augmented and Virtual Reality. Without content that can compete with the forms of entertainment we enjoy today, VR headset sales will remain low; and without a killer app, consumer AR glasses won’t take off. The good news is there are now a number of platforms aimed at equipping the next generation of creators with fast and easy tools for building AR/VR experiences without code. Authoring tools like Snap Lens Studio, Amazon Sumerian, Facebook’s Spark AR, Torch AR, and Adobe’s Project Aero are setting the stage for 2019 to be the Year of the Creator; while Unreal and Unity remain the more robust options for VR developers.

AR/VR in the Auto Industry

The Internet of Things is really kicking off in the automotive industry, with the connected car being one of the most tangible and familiar examples of IoT today. In the evolution towards self-driving cars, automobiles are getting increasingly software-driven and immersive technology is showing up in a variety of form factors including the dashboard. It seems that the future of AR/VR in the automotive industry is closely tied to the development of fully autonomous vehicles, helping to design, assemble, service and shop for the cars of tomorrow and eventually becoming the primary form of in-vehicle entertainment when we no longer need to pay attention to the road.

2018 AR Cloud developments included the launch of the Open AR Cloud Organization at AWE USA 2018, along with the debut of AR Cloud efforts by Magic Leap (Magicverse) and Samsung (Project Whare). The race to build an index of the real world will continue in 2019, with companies working to align digital content with the physical environment on a global scale – essentially making computers spatially aware – in order to enable next-level Augmented Reality. Like a 3D map perfectly overlaid onto the physical world, the AR Cloud will let us pin content to specific locations and have much more powerful shared experiences.

Last year, AR came to the web in a big way, with Magic Leap’s Helio, Apple’s AR Quick Look, 8thWall’s 8th Wall Web, and Mozilla’s Firefox Reality. At CES 2019 earlier this month, HTC and Mozilla announced that Firefox Reality will be the new default browser for the HTC Vive. Mozilla has taken a lead role in developing WebXR, an API designed to make it easy for developers to create immersive content that works from any browser on any XR-capable device; as has Google, which may release Chrome AR sometime in 2019. Watch this space, for web-based XR content will certainly impact immersive tech adoption and overall use, exposing the masses to AR/VR without having to convince them to download an app.

The next-generation of AR/VR applications are going to require greater bandwidth and lower latency than 4G can deliver. Mobility and capacity requirements for wireless streaming will push 4G past its limits and individual data consumption to the roof. Enter 5G: The future of immersive tech depends upon the rollout of 5G, with its promise of faster speeds and the ability to stream huge amounts of data. In 2018, there were several 5G trials and commitments by carriers and device manufacturers to roll out the infrastructure for 5G. In 2019, there will be more 5G hotspots and demonstrations of 5G-enabled AR experiences, increased enterprise demand for 5G, and maybe even 5G-enabled phones with Qualcomm’s newest Snapdragon chip. Though widespread 5G isn’t expected until 2020, development is furthest underway in China and the UK.

In 2018, AR proved itself by increasing sales for early adopters like Houzz and marketers took advantage of new platform opportunities like ARKit/ARCore and Facebook’s “Try Before You Buy” ads in Messenger. 2019 is going to be another good year for mobile AR ads as well as VR marketing and consumer research campaigns. Snap is introducing programmatic AR advertising, Facebook is opening its News Feed to AR ads, and Unity just launched AR as an ad format. Marketers will soon have USDZ, a new file format for AR applications from Apple and Pixar, and AR Quick Look in iOS 12, with which AR experiences can be launched right from Safari. Two places you can count on interacting with AR: e-commerce and the Super Bowl.

Augmented and virtual reality – mainly assisted reality with a heads-up display or tablet – are now well-established tools providing ROI at companies like Boeing, Lockheed Martin (where HoloLens has improved satellite production by over 50%), GE, and Toyota. Expect to see some larger and even full production rollouts of AR/VR in 2019, especially for training workers in manufacturing, aerospace, oil and gas, utilities and other industries with expensive tools and equipment, as well as in healthcare/pharma, retail, supply chain, and even financial services. One rollout we already know of is Walmart, which announced the purchase of 17,000 Oculus Go headsets to train employees. In addition, the U.S. Army recently announced a deal with Microsoft to use the HoloLens in military training.

Gaming, Esports, LBE, and the Arts?

You need to experience a new reality to believe it, which is why immersive gaming, eSports, and Location Based Entertainment (LBE) signal the best way forward for AR/VR at a time when good immersive experiences are too pricey for the average consumer. The huge phenomenon of competitive video games is crossing over to XR (think zero-gravity football): There are already a number of VR esports leagues; and Niantic, which scored a big hit in 2016 with Pokémon Go, is expected to release Wizards Unite, a much-anticipated Harry Potter AR game, this year. Another sign that VR esports are on the rise: HTC and HP have pledged to sponsor Virtuix’s 2019 Omniverse VR Esports tournament series. And despite IMAX shutting down its VR arcade business for good, there are new and planned VR centers (arcades, escape rooms, roller coasters, etc.) all over the world, which, along with LBE AR experiences, should help grow the AR/VR customer base. I’m also hoping to see contemporary artists leverage AR/VR in site-specific exhibits and major shows like the 2019 Whitney Biennial.

The Internet democratized information. Social media eroded our sense of privacy. Next up? Immersive technologies, which are raising significant issues around access, privacy, consent and harassment. In addition to existential concerns like whether human experience will cease to be the touchstone for reality, VR could become a tool for escapism (social isolation), propaganda, violence, identity theft and more. Today, nearly 50% of women users report that sexual harassment is a regular occurrence in social VR and every bit as disturbing as harassment in the real world. And what about the potential privacy nightmare? What happens when companies can track not just our location and clicks but our gaze, behavior, and emotions? Inclusion is another concern: There must be a conscious effort to include people of all gender identities, sexual orientations, ethnicities and socioeconomic backgrounds in shaping the future of AR/VR. 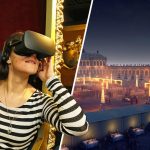 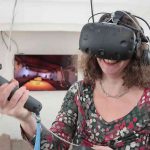