The evolving role of VR in streaming, music, and the craft of percussion.

It may seem like no surprise that music—in the form of creation tools, rhythm games, mind-bending visualizations, and virtual performance venues—have intersected with virtual reality (VR) in a large way.

Rhythm game titles like Beat Saber and Audio Shield have adherents that mod and ultimately let you build amazing skills—sometimes developing their own music tracks for you to play. Other VR apps like TheWaveVR, Electronauts, and Soundstage provide creators with a space or venue for viewing real DJs and musical guests, along with interactive tools and environments that let you create your own music.

Educational musical VR apps like Jam Studio VR by Beamz Interactive focus on teaching you how to play instruments like the saxophone, drums, guitar, and more. But keeping a keen eye on the affordances of VR controllers and how those match up to the different musical instruments, one will note that some are better suited for VR today over others.

TribeXR, for example, has focused on CDJ decks, which are expensive in real life and are suited to be replicated in a virtual environment. You can click and move your hand in a similar fashion to what you’d do in real life to manipulate a CDJ button or slider.

Drumming is another musical instrument that lends itself well to VR. And one new app Paradiddle, is aiming to make drumming in VR a high-quality experience. Think about it, two sticks and an effectively unchanged movement pattern to strike drum heads. Real kits are large and not to mention exceedingly noisy (in the classic drum kit scenario).

The attention detail is what makes this app different from a few other musical apps we’ve seen in VR. For example, no matter how hard or where you hit a drum, it’ll always match the expected sound. And there’s also a way to hook up different types of pedals and peripherals.

To get a better look at the app, you can check out drum cover from the iconic 2014 movie Whiplash in the video below. All of the drum sounds are triggered live in/from Paradiddle.

Speaking with Emre Tanirgan, the former Disney Imagineer and solo developer of Paradiddle, this VR project stemmed from a personal want to drum again. We chat some of the educational implications and potential use cases of VR music learning in the future. (Interview edited for clarity)

VRSCOUT: What are the implications of this approach from purely an education angle?

EMRE TANIRGAN: I think the biggest implication of Paradiddle in terms of education is democratizing drumming and lowering the barrier of entry. I love drumming, but it’s very much an inconvenient hobby. Noise is an immediate problem for many with an acoustic kit, and even with an electronic kit, the cost and dedicated space needed for it still make it a tough purchase. While 6-dof controller VR headsets still aren’t the most accessible in terms of price and the hardware needed, we have to keep in mind that this will improve over time. For anyone with a suitable headset, Paradiddle makes it very easy to get one’s feet wet with drumming, and practice at any point. Even if one person got the app without any drumming experience, and moved on to play real drums afterwards, I’d consider that a huge success and a testament to the potential of VR.

Do you think leading studios and professionals using electronic drum pads like Simmons & Vic Firth would see value in Paradiddle?

There’s some level of interplay between electronic kits and Paradiddle currently – you could use the MIDI integration to bring your electronic drum pedals into VR, or do some fun things like align your VR drums right on top of your electronic kit, and play on them in VR, with all of the visual feedback and additional tools that Paradiddle provides. In terms of how much value that brings to professionals currently, I think these are more so just fun ways to combine the physical and virtual. What eventually will be incredible is the app’s evolution into AR, and the ability to overlay some of this visual feedback on your physical drums, or even place virtual drums next to your real kit to make your kit so much more powerful and flexible. I’m already thinking about some of those use cases, and I think there’s massive potential there that I can’t wait to explore.

What are some of the most unique aspects of practicing within your app over other forms of drumming?

Right, I think the app is especially powerful if you’d like to build the muscle memory or the independence required for drumming, and also improve your sense of rhythm and timing. Before even deciding to release this as an app, I was working on it purely for myself as a practice tool, and my test for the skill translation between VR and real life was seeing if I could play actual songs in Paradiddle. And it worked! So much so that I’ve taught myself how to play certain songs just by practicing them in VR for my drum covers.

I actually don’t have a ton of experience on the drum set, I used to be a snare drum player in marching band in college, so I never was very confident when it came to playing on multiple drums. Paradiddle let me get used to the idea of moving some of my stick play to other drums and cymbals, and I think that was a huge help. And supporting all sorts of pedals in the app has been a huge advantage for a lot of people; foot skills are vital for being comfortable on a drum set, and you can start working on them even with the cheapest of pedals in Paradiddle. I’d also like to note that if you’d like to learn how to drum through practicing in Paradiddle, you should probably pair the practice in VR with some practice on a drum pad so that you can understand and get comfortable with proper stick technique. There’s (currently) no way to use your drum sticks in Paradiddle, so I think a combined approach is best for learning.

Any top users that use Paradiddle that come mind?

One Paradiddle user I always love talking about is ElNeax, who performed this The Pretender cover, and several other covers that I’d recommend checking out. What is most impressive about all of his covers is that he has actually never played real drums in his life! He has more than 80 hours of Paradiddle play time under his belt, and it’s simply incredible how good he has gotten. I organized our first Paradiddle VR drum cover contest a few months back, and he came in first with another cover. He doesn’t even use pedals to trigger his kick drum – he says he’s very comfortable using the Oculus Touch buttons and trigger. I’d absolutely love to see what would happen if we put him in front of a real drum set.

Apps like Oculus Medium and Gravity Sketch appear like a tide shift for an entire industry, what do you make of this as an analogy for the music industry?

Considering how we’re still in the early days, it’s very encouraging to see people take more interest in VR audio apps such as Paradiddle, EXA, and Electronauts, and I’m curious to see what gaps they can fill in the lives of more professional musicians and sound engineers.

Currently it seems like these tools can act as viable virtual instruments for professionals who don’t want to invest in specialized hardware, or who would rather move away from working with instruments on a 2D screen, into a 3D environment where they can leverage their existing instrument playing skills more easily. So I can see a hybrid approach where musicians “block in” a piece they are working on using these VR tools, and polish it up and add the finishing touches using existing, more professional audio software.

Do you see Paradiddle as a new avenue for drummers to add depth to live performances? What is the potential for folks to stream or record video and post those to video hosting sites?

I’d love to see more musicians use Paradiddle as a live performance tool. The MIDI input/output support of the app in particular makes the possibilities endless as well; it would be trivial to hook up the app to some custom audio-reactive visuals and sounds and take a performance to the next level. In fact, one of the coolest things I’ve seen come out of the community was one of the users going live on Twitch with Paradiddle, and taking live song requests to play drum covers of.

There’s also a public YouTube playlist I’ve been updating that lists all of the drum covers performed with the app, so I think people are slowly starting to realize the potential. I’ve been trying to make it as easy as possible for streamers and performers to record their sessions and present them in a pleasing way; the first/third person camera tool is an example of a feature that was added specifically for that purpose.

If you could recommend one element in Paradiddle a total beginner must try, what would it be?

I’d recommend loading one of the recordings that the app comes with, and checking out the playback feature. What happens when a recording is played back in Paradiddle is that you see visual cues that tell you when you should be hitting the drums. Not only is it cool to just sit back and watch the drums get played in front of you while the environment reacts to them, but I think the implications of this feature are huge for learning complex pieces.

You could easily teach yourself a new song by just downloading a recording someone else has made, slowing it down if you want, and learning individual parts through the help of these visual cues. I’m incredibly excited to improve this feature in the future by providing different ways of visualizing when to hit the drums (such as a musical tab/note view), and supporting the playback of different file types, for instance. 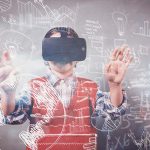 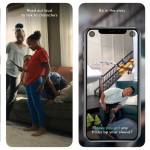