How VR Is Making Construction Safer

VR-based simulators and apps are changing the game in construction, especially in the area of safety training.

Virtual reality is making an impact in the construction industry, but not in ways that many would expect. The technology promises to provide solutions to everything from BIM to real estate site walkthroughs, but often gets lost in a seemingly never-ending stream of tech-driven products that claim to do the same. One area that VR really shines, however, is in its potential to save lives.

Through apps and training simulators, VR often allows trainees to get hands-on experience with common hazards without the corresponding risk — drastically upping the possibility of workers being better able to handle uncertainty on the jobsite.

Data from the U.S. Bureau of Labor Statistics show that OSHA citations related to fall safety quadrupled from 1995 to 2016, while pages of ANSI standards addressing fall protection went from 100 to 1,000 and annual personal protective equipment sales ballooned from $300 million to $800 million.

Yet in the same timeframe, annual workplace fall fatalities rose from 651 to 849 while overall workplace fatalities decreased 17%. “We’ve never had more equipment out there, but people are still falling to their deaths,” said Kramer.

In response, the American Society of Safety Professionals developed a VR, headset-based Fall Protection Experience app that simulates high-risk construction environments and follows ANSI/ASSP Z359 fall protection and restraint standards. Through immersing users in a graphic simulation of a two-story building and prompting them to identify common fall hazards then build an appropriate fall protection system, the app demonstrates that fall protection is a system of components working in tandem rather than just a single piece of equipment. Kramer purports that the app can teach in seven minutes what would take hours of lecture time in a classroom.

Another perk to putting what can be perceived as a dry subject in a VR-based app — the ability to „gamify“ safety training. “Safety sometimes gets a bad rap for not being the most exciting, but when we debuted this at Safety 2018 in June, we had people lining up to do it,” Kramer recalled. “It increases attention spans and reinforces critical behaviors.”

Like many trades, ironworking is particularly prone to labor shortages. Elevating career education and supporting workforce development is one tactic to get around the shortage, said Ironworks International apprenticeship and training coordinator Russell Gschwind. “We need to get rid of the stigma of the trades,” he said.

The Ironworkers International’s pre-apprenticeship program is targeting as many demographics as possible, including specific programs for women and veterans, and is helping participants develop the required skills and trade knowledge.

The group uses VR so it can train in a safe environment. “It’s expensive,” Gschwind​ admitted, “but the savings in safety balances outweigh the cost. It gives young members the ability to make mistakes without disastrous consequences and allows for training in hazardous situations, unlike what hands-on training can.

“But,” he continued, “hands-on training can never be replaced. VR does prepare them quite well, though.”

Gschwind wasn’t sold on the technology initially. “I didn’t buy into VR much when I first saw it,” he said. “I thought it was a new thing people will [be] trying to make some money off. As I started to use it and see what it could do for us, though, I changed my mind.”

Some programs the union has used include an aerial lift simulator, a VR rigging application, AR and VR welding and field training technology. Teams also train with a total workstation, which doesn’t involve VR, but falls in the category of new technology that Gschwind believes will prepare workers for careers in the trades.

The majority of fall-related deaths happen because an untrained person is being asked to conduct temporary work at heights using improper or an inadequate method to reach the height, said Tim Whiteman, CEO and managing director of the International Powered Access Federation (IPAF).

He says powered access, such as through a mobile elevated work platform or a mast-climbing work platform, is the safest and most effective way to reach the needed height. Even in light of these powered machines, though, knowing how to use them is essential so that everyone goes home unharmed at the end of the day. The challenge, Whiteman says, is making that training accessible.

That’s where VR comes in. Whereas the traditional training methods involve a half-day in the classroom and a half-day on the machines before trainees take a test, VR simulation takes users through true-to-life demonstrations for enhanced and expedited instruction.

„People who haven’t been on a simulator have a vastly different opinion of what VR and simulators can be used for compared to those who have been on one for even five minutes,“ he said. „It changes your view very quickly.”

Whiteman went on to explain how the most sophisticated 3D simulators make you feel as though you’re in the machine; he’s actually seen people hesitant to try to operate them because it feels so realistic.

“The reality of the VR simulators is utterly awesome,” he said, adding “Nobody really knows where the tech will go in this stage of the industry. Two years ago no one was even thinking half-seriously about the use of simulators in training people and now there is equipment out there to train apprentices and put them in realistic situations.”

But as with everything, there are pros and cons. The simulators allow trainees to experience high-risk situations not otherwise safely possible, as well as observing how an operator will react in certain scenarios and measuring competency. One downside, however, according to Whiteman, is that constant immersion in a VR environment can lead a trainee to develop a false sense of invincibility and dampen instinct to real-life dangers.

“If you make a mistake [in a VR simulator], you can just press the reset button,” he said.

Although IPAF doesn’t envision simulators completely replacing real-life training, it isn’t ruling out the possibility, citing how airline pilots train in simulators. “It has the capacity to enhance training and make it more engaging,” he said. “We’re really only just starting to understand what’s possible. There’s no doubt there’s an exciting future for VR.” 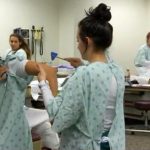 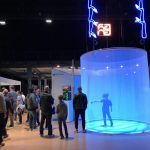