The same technology that’s revolutionizing video games is being used to develop new drugs and fight some of the world’s deadliest diseases.

Chemists at C4X Discovery are using the virtual reality technology behind popular game Fortnite to visualize the structure of complex molecules. The tool, called 4Sight, has already been used to create a drug that is now in development to treat addiction.

Biochemists are also using the technology to develop drugs to tackle other diseases, such as cancer and Parkinson’s.

Scientists traditionally used physical models to visualize drugs. But 4Sight allows drug developers to grab hold of virtual molecules and see how they move and respond to stimuli.

The key to drug design is finding the right shape for the molecule to fit inside the targeted protein pocket. If you get the wrong shape, the molecule could fail to attach or even lodge in a different pocket, causing side effects.

„Moving molecules around that are very complicated is so much easier by grabbing them than by trying to use a mouse on a keyboard,“ says Craig Fox, chief scientific officer at C4X Discovery.

The company claims that the technology could help to reduce the margin of error during the drug discovery process and enable scientists in different locations to work on drug models in the same virtual room.

„It takes about 10 to 12 years to take a drug from the concept to the market,“ says Fox. „It’s often described as trying to find a needle in a haystack.“

It’s also exceedingly expensive. It costs $2.6 billion on average to develop a new prescription medicine that gains market approval, according to the Tufts Center for Study of Drug Development.

Anything that helps speed up the development process and make it less laborious for scientists is welcome. That’s why C4X Discovery hired former video game developer Phil Muwanga for the job of lead coder.

„The software is the same as a game,“ says Muwanga, „we have a user base, we’re trying to get them to do tasks over and over again. And we’re trying to do it in a fun and intuitive fashion.“

4Sight enables scientists to visualize the unique 4-D data (measuring space and time as well as length, width and depth) that C4X Discovery has accumulated on small drug molecules.

„We are making a scientific tool that scientists will use to improve their daily lives,“ says Muwanga. „That being said I am from the games industry and I do treat this as a game — people interact with it in the same way.“

Virtual reality has shown its potential in other areas of health care.

The global market for artificial and virtual reality in health care is projected to reach $5.1 billion by 2025, according to a 2017 report by Grand View Research.

The biggest pharma companies recognize potential of virtual reality tools. Novartis is using them in the drug design process, and Pfizer has experimented with applications from clinical trial design to manufacturing.

„We believe immersive technologies can in the future provide cognitive behavioral assistance and even telehealth,“ says Jim Mangione, Pfizer’s director of emerging technologies. Education is widely expected to be an area where AR and VR will see major play, but we can’t start at zero and immediately arrive at a world of immersive, transformed education. It takes stepping stones. MyLab is one such stepping stone, which, using Microsoft’s HoloLens headset’ offers up a touchless, interactive periodic table for chemistry students.

For many, hands-on learning is the best way to learn. But you can’t quite go hands-on with particles much smaller than the naked eye can see, nor with their invisible interactions. That’s the heart of chemistry, the tiny interactions and invisible characteristics of elements that make them behave vastly differently. As such, chemistry at the basic level is often taught in concept from books, while simple experiments usually look at the results of chemical interactions in lieu of being able to actually observe the interactions themselves.

Augmented reality app MyLab aims to make a connection between the textbook concepts and the observational experiments by offering an interactive periodic table which also visualizes the hidden structures of the elements. The app’s creator, Lucas Rizzotto, explains how it works in the video heading this article. MyLab can be downloaded for free on HoloLens via the Microsoft Store.

Now, this isn’t something that couldn’t, for the most part, be achieved on an iPad—except for one thing: the ability to interact with the app and its data without touching it. Thanks to HoloLens’ floating AR interface and gesture-based interactions, a student in the lab wearing gloves who might be handling dangerous chemicals can position the interface floating anywhere in view and interact with the data without needing to be wary of contaminating a devices like an iPad or computer.

This is indeed a pretty cool app, but more importantly, it’s a stepping stone for bringing AR into the classroom in a more significant way. Deeper AR integration in classrooms can be imagined easily—perhaps the teacher is able to annotate parts of the student’s periodic table or even guide them through the experiment remotely in real-time—but to reach real, practical integration takes a series of smaller steps to figure out the best way to design such apps that are productive and valuable, and not just novel. There’s a world of possibilities when it comes to AR; MyLab makes a small but real step in that direction.

I Expect You to Die developer Schell Games have released a trailer for their latest project SuperChem VR, an incredibly fun looking way to teach chemistry and perhaps a glimpse into the potential future for VR in education.

We’ve seen a lot of application attempt to capture some of the potential VR enthusiasts of immersive computing know VR can deliver. But Jessie Schell’s studio, responsible for the ingenious Bond-esque VR puzzle title I Expect You to Die, seem to really be onto something with their latest title SuperChem, and I think it may be one to watch.

SuperChem’s concept is simple; Utilise the immersive properties of virtual reality to provide students with both a safe and fun environment in which to learn about chemistry. Doing this in VR means there’s no danger of harm from caustic or corrosive chemicals, no risk or accidental fire damage and, perhaps most importantly, you can give the user access to infinite resources and ensure maximum engagement by designing the setting to be fun and to encourage curiosity. 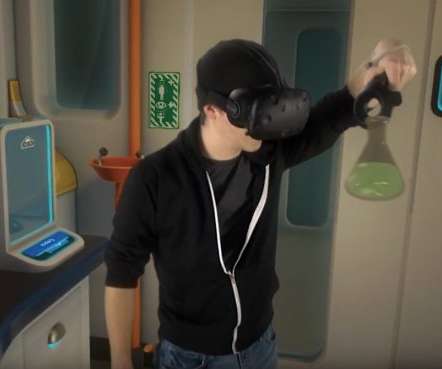 “Teachers report that learning about chemicals, lab equipment and how to use the equipment correctly can be a slow process,” says Jessie Schell, CEO of Schell Games, “So SuperChem VR is designed to allow you to learn about these concepts in a safe, interactive and immersive way.”

The application as it stands puts the user in a futuristic space laboratory, surrounded by chemical dispensers, but also very un-futuristic, very familiar conical flasks and measurement cylinders. You can access different chemicals which are virtually synthesised on command and then mix any of them using the same physical actions you’d perform in real life. You can mad scientist your heart out, analysing the results as you go and, should you get stuck, there’s a friendly assistant to guide and prompt you in the right direction and to set you individual tasks and experiments to carry out. “This combination of an immersive and engaging environment with scaffolding for exploring chemistry allows you to have fun while learning,” says Schell.

The project was created with support from the Institution of Education Sciences (part of the U.S. Department of Education) along with the Small Business Innovation Research although it’s not clear if or how it’ll be rolled out for actual use in educational institutions. From my perspective however, the format seems like a winner and for someone like me who really struggled grappling with some aspects of science at school, despite having a keen interest, I think something like SuperChem VR would have been a real help in earning my engagement. What do you think of SuperChem VR‘s concept and its practical uses for programs like it in education today and in the future?