You’ve probably heard the term “digital twin.” But, have you ever heard it explained?

The explosion in XR technology and applications in the last few years means that there are a lot of new terms gaining prevalence. It can be hard to keep up. One that you may have heard – maybe even come across on ARPost – is “digital twin.” But, what exactly does that mean?

A “digital twin” is a virtual version of something that also exists as a physical object. The name can even help us understand the idea, to some degree, if we use it as an analogy – though it doesn’t always fit.

Like human twins, digital twins may look similar to their physical counterparts, but the two may behave very differently. One of the big benefits of the digital version is that it can often do things or go places that the physical version can’t.

Unlike human twins, however, digital twins don’t necessarily come along at the same time and aren’t necessarily created by the same people. Who creates twins, when, and how, all depend on what purpose they are intended to serve.

When the Digital Twin Is Older

A lot of digital twins predate their physical counterparts and come into the world largely as a byproduct. We’re talking here about virtual design models. 3D software, like a Computer Assisted Design (CAD) program, is used to create a mockup with the intention of a physical final product. This is commonplace in the automotive industry.

The digital model may be used internally to train engineers or develop new products. It may be optimized in a game engine for salesmen to present it in virtual showrooms. It may even be used in a video game. Increasingly, these models are also being auctioned off to car collectors as NFTs for their digital collections.

When the Physical Twin Is Older

On the other hand, the digital twin may come along much later than the physical twin. This often happens when people create a 3D model from an object that already exists. As mentioned above, a digital model can do things and go places that a physical object might not be able to.

One top-of-mind example is “Memorial to a Marriage” – a three-ton marble sculpture in New York with a 3D scan serving as the centerpiece of the LGBTQ+ VR Museum. The museum is filled with virtual scans of historical objects, but none of them better illustrate how a well-used digital model can take the idea behind a physical object and make it more accessible.

So far, we’ve been talking about what digital twins look like. However, they don’t need to look like the physical version to qualify.

Do Digital Twins Have Bodies?

Enterprise applications use information from connected devices to create multifaceted real-time reports on machines or entire physical environments. These digital twins of the Internet of Things (IoT) are a version of “computer models” that look more like data points on a spreadsheet than like a virtual object.

These computer models don’t just work one way. Analysts can change parameters in the computer model to simulate what would happen to the physical machine or environment in different scenarios. This can optimize performance by helping mechanics understand efficiency or simulate disasters without risking real workers and infrastructure.

These computer models are increasingly undergoing visualization. A Resonai demo at AWE showcased how inputs from IoT devices can be incorporated into a digital model of an entire building. This helps to visualize how and where machines are affecting the environment – particularly for people who aren’t experts in reading row-and-column computer models.

Non-fungible tokens (NFTs) can be another example of digital twins that look nothing like a physical twin. NFTs are identifiers for specific items on a blockchain. So, when we think of NFTs as digital art, the NFT represents digital art but just looks like a sequence of alphanumeric characters. And, there’s no law saying that an NFT has to represent digital art.

Say what you will about cryptocurrency scams and the price of JPEGs, the fact is that the blockchain itself is an incredibly secure and trustworthy way to organize and secure information. As a result, NFTs are increasingly being used as the 21st-century version of certificates of authenticity, (physical) art provenance, or even property deeds.

In all of these cases, even though the NFT still just looks like a line of letters and numbers, it’s standing in for a physical object. That makes it a kind of digital twin.

Do I Have a Twin?

What about digital twins of people? Honestly, it’s kind of becoming a thing. Sort of.

There are digital versions of a couple of people – mainly actors. These digital doppelgängers allow a thespian to act alongside himself or herself. They also allow actors to appear in films after they’ve passed away, or to appear younger on screen.

Right now, these twins are just tremendously detailed rigged 3D assets – they don’t think for themselves. But, the day may be coming. Dr. Martine Rothblatt’s 2014 book Virtually Human explores the idea of “mindclones” – AI versions of real people trained from things like the living person’s social media posts.

We could study them to learn more about the human mind. We could also use them to “live forever” similar to Johnny Depp’s character in Transcendence – which also came out in 2014 (coincidence?). A mindclone could even be used to animate the kind of human digital twins that we do have, creating immortal embodied avatars.

It’s interesting to think of technologists training their own mindclones while alive to prepare themselves for death – kind of like talking to your portrait in the Harry Potter universe. It’s something that’s definitely probably happening already.

Like many technological terms, “digital twin” has been around a lot longer than you might think – longer than the fresh hype generated by advancements in virtual and augmented reality.

However, by extending our ability to visualize data, XR is also revolutionizing the ways that digital twins are used – and the kinds of people that use them to what ends. 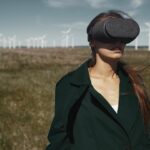 Why Using VR for Training in the Renewables Sector Makes Sense