Dent Reality, the UK-based augmented reality startup, announced it’s secured £2.5m (~$3.4m) in funding, something the company plans to use to further its efforts to bring phone-based AR navigation into the retail sector.

The funding round was led by Pi Labs, with participation from Europe’s Sugar Capital, Silicon Valley’s 7Percent Ventures, and a number of angel investors. According to Crunchbase data, this follows a pre-seed investment round closed in March 2020, the amount of which wasn’t publicly disclosed.

Dent Reality has been building its AR-driven indoor positioning system for some time now. We last heard about Dent Reality early-2019 when the company first announced it would release a software development kit for iOS so retailers could integrate the map of indoor spaces, figure out where the user is, and use virtual paths and arrows to help shoppers find their destinations—a bit like an indoor GPS.

Co-founded by Andrew Hart and Ben Rosenbaum in 2019, the company has made strides in achieving wider recognition from traditional retailers. The company reveals it’s been working with UK-based retailer Marks & Spencer on a new testcase for its indoor tracking in the retailer’s Westfield London store in White City. That’s M&S in the video above.

“The app helps shoppers find every item on their list, with real-time guidance and information to supercharge their experience,” Dent Reality says. “The potential of the technology is extensive, and can be applied to campuses, airports, shopping centres, and museums, for example. Dent Reality’s waiting list currently includes hundreds of large organisations across a diverse range of different sectors.”

The studio says its able to operate in an environment where there may be 40,000 items in a typical location, and thousands of locations per retailer.

“Our vision is that every physical space will become digitally connected, enabling an entirely new type of interaction with the world around us. These ‘smart spaces’ will unlock rich information and transform billions of daily interactions for shoppers and retailers,” said CEO and co-founder Andrew Dent. “Right now, the biggest players in tech are working on building next-generation augmented reality wearables, and we’re building the killer consumer use-cases for this transformative technology. In the future, providing a frictionless digital experience in a physical location will become as essential for every business as having a website is today.”

The funding will be used to expand its team and services, the studio says, which will bring its services to new stores and retailers. 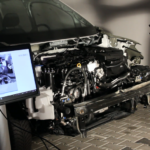 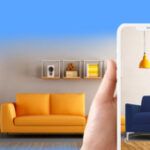