Accenture has deployed the largest number of VR headsets by any company.

There are many things the COVID-19 pandemic has helped bring into the mainstream, including an accelerated adoption of technology by individuals and enterprises. More people today appear interested in leveraging technology to work from home. Enterprises, too, are adopting or trying new technologies for a smooth transition. It seems the day is not far when companies start hiring and training their employees in virtual reality (VR). As ambitious as it may sound, it is very much feasible. For instance, Accenture, the multinational IT services and consulting firm, has deployed the largest number of VR headsets by any company.

During an interview with Fortune, Accenture CEO Julie Sweet revealed the immersive technology acquisition, saying the company has acquired 60,000 Oculus headsets for onboarding and training new employees. But Accenture is only the latest in a line of other giants such as Walmart and Bank of America in embracing the technology.

“It’s (VR) a great way to learn about Accenture in a more engaging fashion but have an experience with people you don’t get to be in a room with going through your new joiner training,” Julie Sweet said.

Established in 2001, Accenture has grown to become one of the world’s largest employers. More than 620,000 people work at its offices worldwide. Accenture hired 54,000 employees in the last quarter.

Why is VR an important development during onboarding/ hiring? It’s because new hires need to understand and familiarize themselves with the company’s policies and culture and their position in the bigger setup. An effective onboarding process improves the retention rate of a company significantly.

The VR headsets help in these areas. They have become a serious tool for learning and can be used in dangerous, expensive, and difficult scenarios, and also help in developing soft skills like empathy. VR has the potential to impact how we learn, teach, and train. 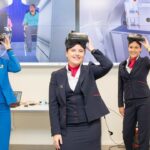 Connecting a jet bridge from a classroom? No longer a dream! 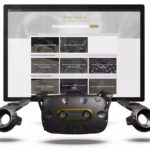