A new app called Brushwork VR offers a way for users to simulate painting on a canvas in VR with any headset that supports immersive WebXR browser experiences.

The experience can be launched from your headset at BrushworkVR.com and should work on any WebXR-support headset browser, including Quest 2 and many PC VR headsets. It’s entirely free to use, quite comprehensive and offers a fair amount of customization and options.

In terms of canvases and paint brushes, there’s a variety of sizes of both to choose from. As you would hope, the paint from the brush seems to react fairly realistically when dragged along the canvas. You can pick up and hold brushes at any angle, and put them into two modes — one adds a new layer of paint on top and another allows you to mix between colors. You’re equipped with a palette to your left, which you can use to mix colors together and find the exact right shade to go onto the canvas.

Your paintings can be saved and resumed later on, as well as shared with others via a code that can be entered into the Brushwork VR website. You can also upload a reference image via the website when on the same network as your headset, which will be loaded into the app for you take work alongside.

The app is still in alpha but shows a lot of promise as a web-based painting simulator for VR. We’ve also recently seen other apps like Painting VR on Quest via App Lab, which offers similar functionality for budding VR painters, or the upcoming Vermillion for PC VR and Quest.

You can try Brushwork VR on any WebXR-supported headset browser at BrushworkVR.com. 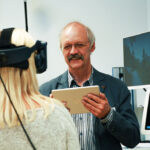 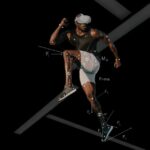 5 Ways VR Can be Used for Medical Intervention and Rehabilitation